The death of Sudan, the last male northern white rhino, on March 20 was an unfortunate milestone in wildlife conservation. It may be another story of extinction that illustrates how much work needs to be done to protect and preserve keystone species. Paul G. Allen Philanthropies and Vulcan Inc. are working alongside many partners, researchers, technologists and grant recipients to develop new technologies, data and policies that will tackle the challenges facing wildlife. Our experts weighed in on what the death of Sudan means.

A little over a century ago, the loss of buffalo and passenger pigeon from America’s Great Plains prompted Teddy Roosevelt to ask what sort of world we want to leave to our grandchildren. Though environmental destruction has continued in the US, our lives and our culture are deeply enriched by the land that Roosevelt and his successors set aside for conservation. Today, the death of Africa’s last northern white rhino is a wakeup call that the world’s resources are finite and we owe to future generations a world alive with wildlife and wild places. Let us not be remembered as the generation that squandered mankind’s inheritance.

-Dr. James Deutsch, is a global leader in conservation strategy and is currently focused on protecting endangered species and ecosystems, including sharks, rays, elephants and coral reefs as Director of Biodiversity Conservation with Paul G. Allen Philanthropies.

‘We Have the Ability to Act’

The death of Sudan, the last male northern white rhino, is a reminder of the tremendous impact humans have on the other creatures with whom we share our planet. We must recognize that such losses diminish the richness of our planet, and we must decide as a society to care. If we do care, we have the ability to act by harnessing the incredible technological tools we have created coupled with rapidly advancing scientific understanding to make policy choices that can avoid these tragic losses.

-Ted Schmitt has extensive history in developing wildlife conservation technologies that help protect the planet’s most threatened species. As the principal business and partnership development manager for Paul G. Allen Philanthropies, Schmitt has his team have created the Domain Awareness System (DAS), a cutting-edge wildlife dashboard that integrates data from all technology used in a protected area, providing a single operational picture alerting wildlife managers when critical threats pop-up.

‘We Must Offer More Than We Have Yet Imagined’

The passing of Sudan tragically represents the end of the line for the northern white rhino despite all the best scientific tools, technological advances, policies and caring that conservation has to offer. If the world’s vast biodiversity, and especially its long list of critically endangered species like the vaquita and North Atlantic right whale, is to stand a chance in an overwhelmingly human-centered planet, we collectively must offer much more to them than we have yet imagined.

-Dr. Kathleen Gobush is a senior wildlife researcher for Paul G. Allen Philanthropies. In her role, Dr. Gobush leads projects and programs that use innovative approaches and reliable data to address the greatest threats to wildlife including poaching, trafficking and habitat loss, as well as advising on policy changes that can protect endangered species. She has published more than 20 papers and dozens of reports covering important conservation topics such as long-term impacts of poaching and the ivory trade on African elephant populations. 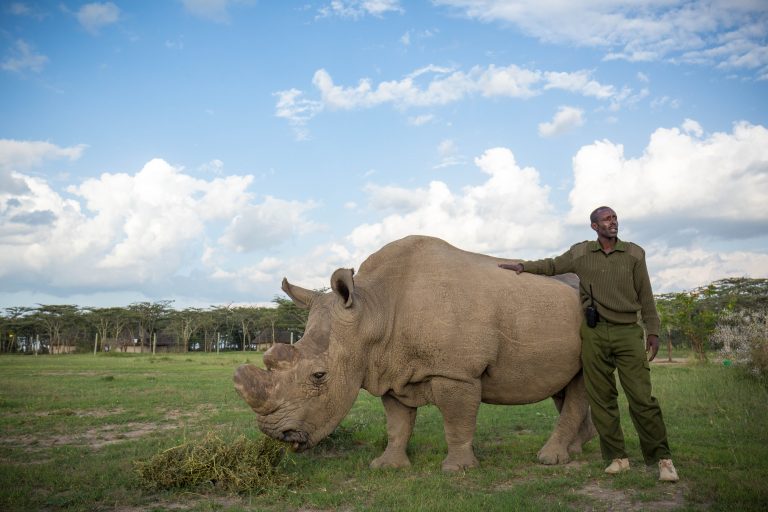 In a photograph taken 22 May 2015, a rhino handler stands with ‘Sudan’, the world’s last remaining male northern white rhino at the Ol Pejeta Conservancy in Kenya. Credit: Make It Kenya / Stuart Price

The death of Sudan demonstrates the urgent need to strengthen wildlife crime policies, institutions, and law enforcement capacity-building to protect current endangered species like the northern white rhino and prevent future wildlife degradation. Policy interventions such as domestic ivory bans that are in place in China and the United States for example, are critical to eliminating the market for ivory and other illegal wildlife like rhino horn. Further, cutting off the financing of the syndicates, such as through sanctioning and seizing assets of wildlife traffickers, is another approach that will stop the illegal trade in wildlife. We believe the best way forward is to equip law enforcement across Africa and Asia with data and information to make informed decisions to get ahead of poachers and wildlife trafficking syndicates.

-Shana Tischler is a senior strategy manager focusing on wildlife trafficking and illegal fishing for Paul G. Allen Philanthropies. As part of her role, Tischler develops and manages technology-driven projects and innovative approaches to build capacity for wildlife crime enforcement. She has an extensive background combating illicit finance and trafficking, previously serving as the Wildlife Anti-Trafficking Coordinator at U.S. Embassy Tanzania.