As we prepare to celebrate another World Elephant Day, we want to take a moment to look back on one of Paul Allen’s most important and impactful elephant conservation projects to date. In February 2014, a small airplane took off from the dusty, red airstrip in Tsavo National Park to count elephants. It was the start of the Great Elephant Census. In the following two years, surveyors flew the distance to the moon and a quarter of the back, counting elephants in landscapes throughout Africa.

Pioneering in both scale and technological innovation, Paul invested $7 million into the Great Elephant Census, the first pan-African census in over 30 years, with the ultimate goal of collecting data critical to making informed decisions about elephant conservation and wildlife management. 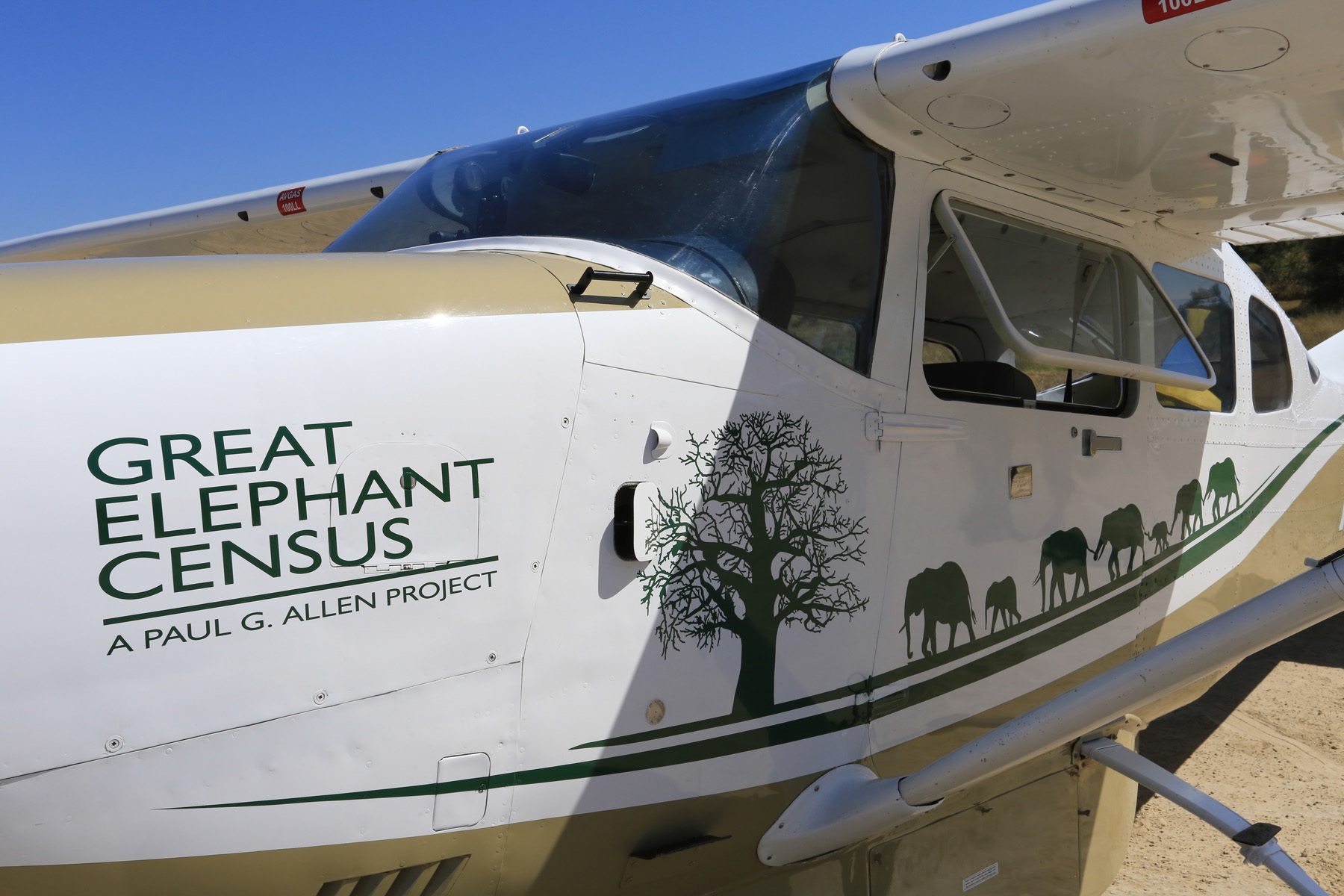 Coordinated by Vulcan Inc. and in partnership with national park and wildlife staff in 18 African countries, 7 NGOs, 90 scientists and 286 crew, and principal investigator Mike Chase of Elephants Without Borders, the Great Elephant Census results were announced in September 2016, and confirmed the worst fears of so many; there were only 350,000 African savanna elephants remaining, a 30 percent population drop in just 7 years. 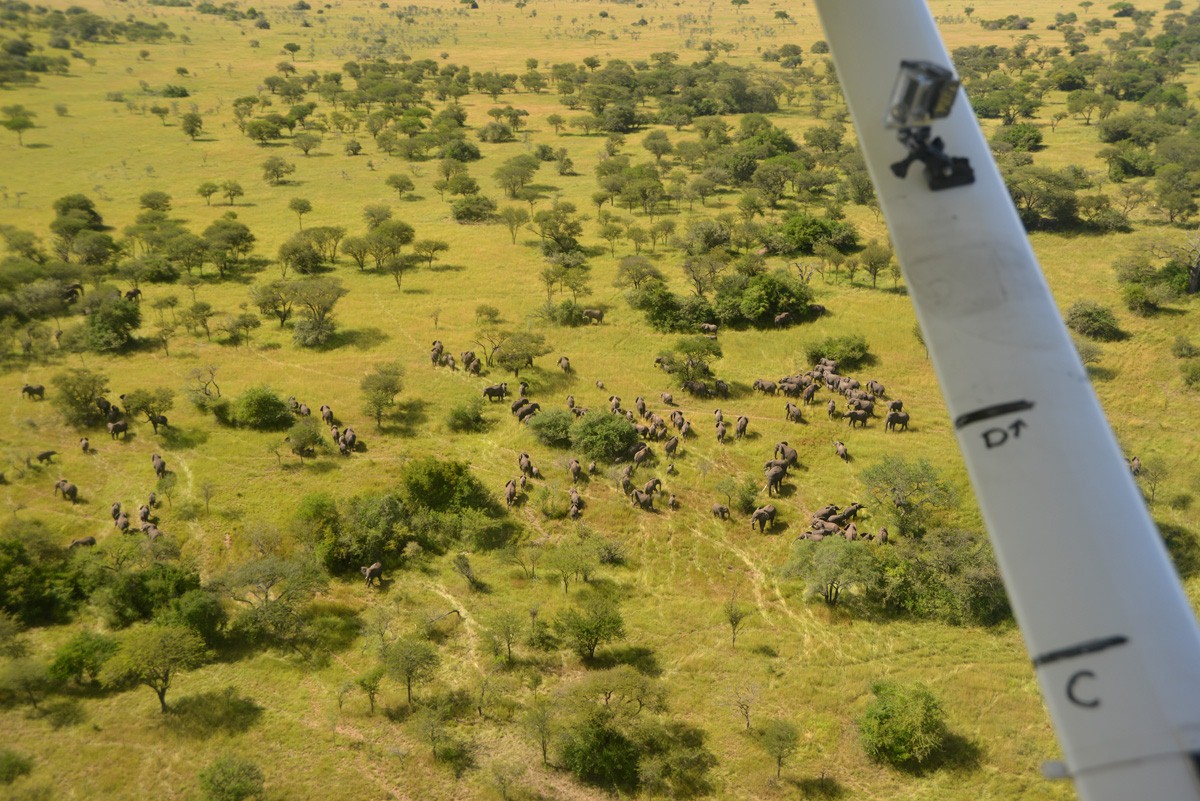 A herd crosses the Serengeti.

The earliest reports back from surveyors flying the Great Elephant Census results were a mixed bag of joy and tragedy. Zakouma National Park in Chad and the Tsavo ecosystem in Kenya reported a promising view of new calves and strong herds. Meanwhile, the Babile Elephant Sanctuary in Ethiopia no longer lived up to its name, and surveyors recorded an ocean of agriculture, devastating human development and just a few dozen elephants. 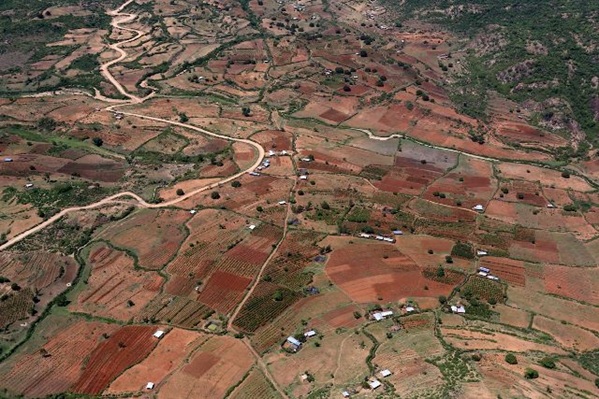 In June 2014, the African elephant community was hit with another devastating loss. The mutilated body of the great tusker Satao, one of the oldest and most famous elephants in Kenya’s Tsavo ecosystem, was discovered by wildlife officials. His magnificent and recognizable tusks gone. The Great Elephant Census captured some of the last known footage of the tusker, and his loss mobilized the need for the census even further.

By 2015 and early 2016, more preliminary results were shared (though behind the scenes, the data was still being validated by scientists and researchers). The results from Tanzania shook the world; a 60 percent decline since 2009. Meanwhile, beacons of hope were reported elsewhere. In Uganda, the elephant population had rebuilt from 700-800 after rampant poaching in the 1970’s and 1980’s to 5,000 strong, and Angola announced they would join the Census and have their elephants surveyed for the first time. In Zambia, preliminary results were a mixed bag, with stable populations in two of the largest elephant landscapes and catastrophic decline in other areas. 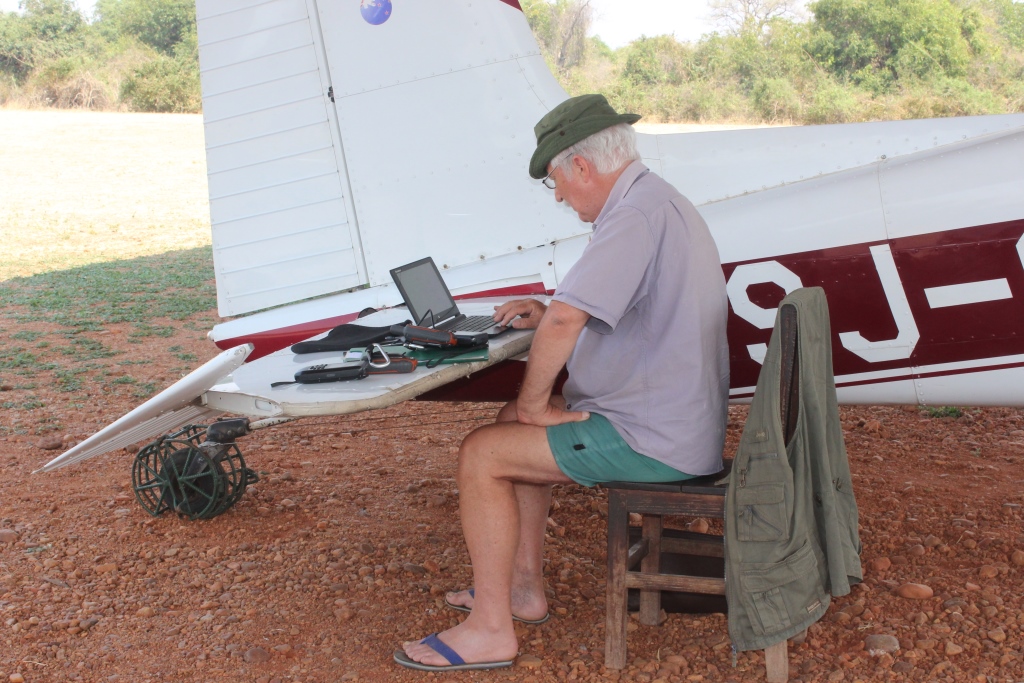 Reviewing the data in the field in Zambia.

In August 2016, the final Great Elephant Census results were complete and announced at the International Union for Conservation of Nature (IUCN) World Conservation Congress. The results shocked the world. Savanna elephant populations declined by 30 percent in seven years. The current rate of decline was 8 percent per year, primarily due to poaching. The rate of decline accelerated from 2007-2014, and the high number of elephant carcasses were discovered in protected areas, indicating that elephants were struggling to survive even in spaces that had some anti-poaching support. 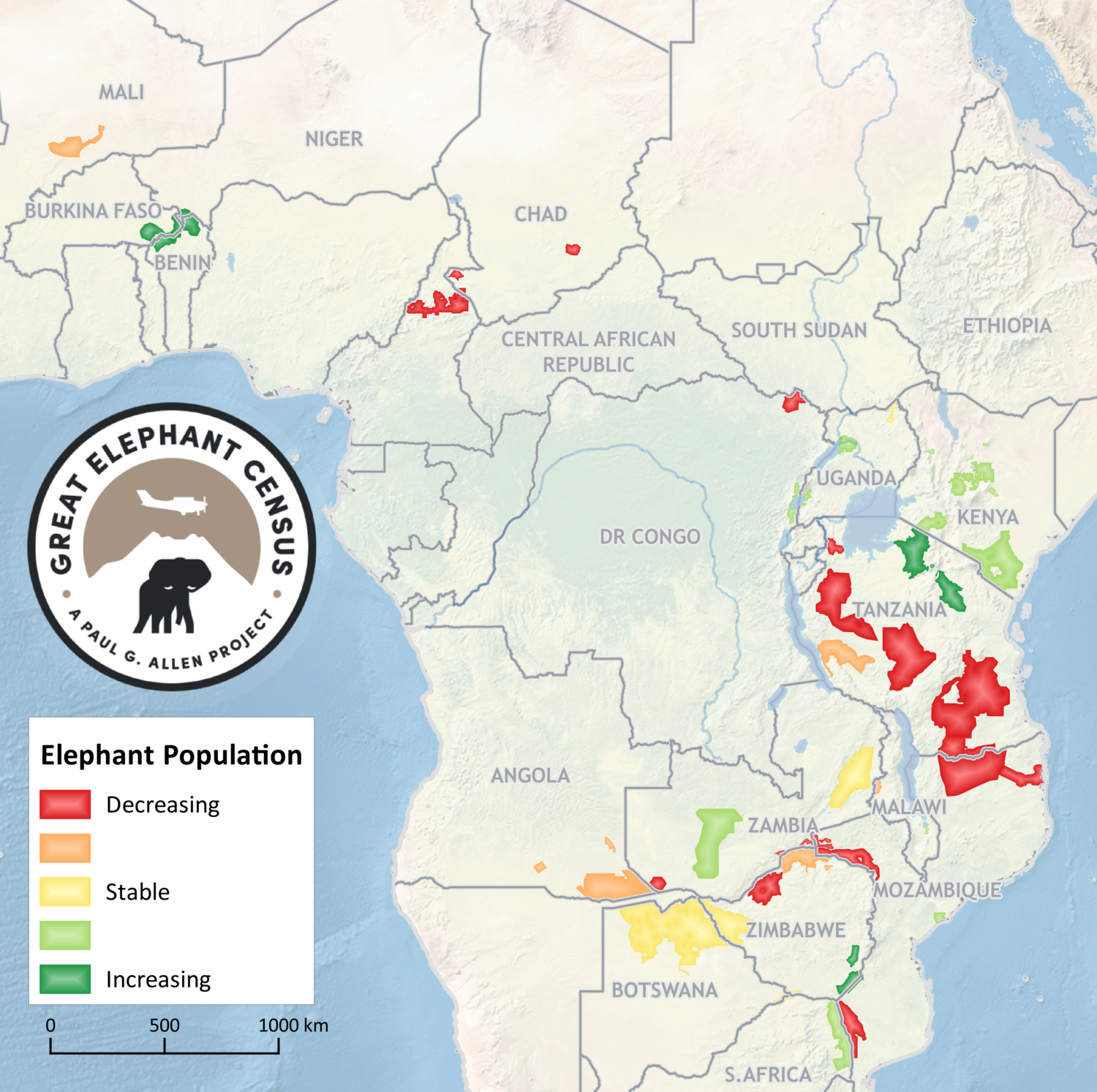 Since the Great Elephant Census revealed the results, we’ve seen actions from governments across the world.

At the IUCN conference where the results were revealed, the delegates passed a motion to call on countries to close their domestic ivory trades. Then at CITES, all 182 member nations agreed that legal ivory markets must be closed. In Tanzania, which saw some of the most catastrophic declines in elephant populations, the government stepped up enforcement, resulting in two huge arrests of ivory traffickers the “Ivory Queen” and “Shetani”. Then, the coup de grace, China and Hong Kong, the two largest ivory consumers in the world, with massive legal markets that provide cover for thousands of pounds of illegal ivory to filter in, agreed they would shut down the trade of all ivory. 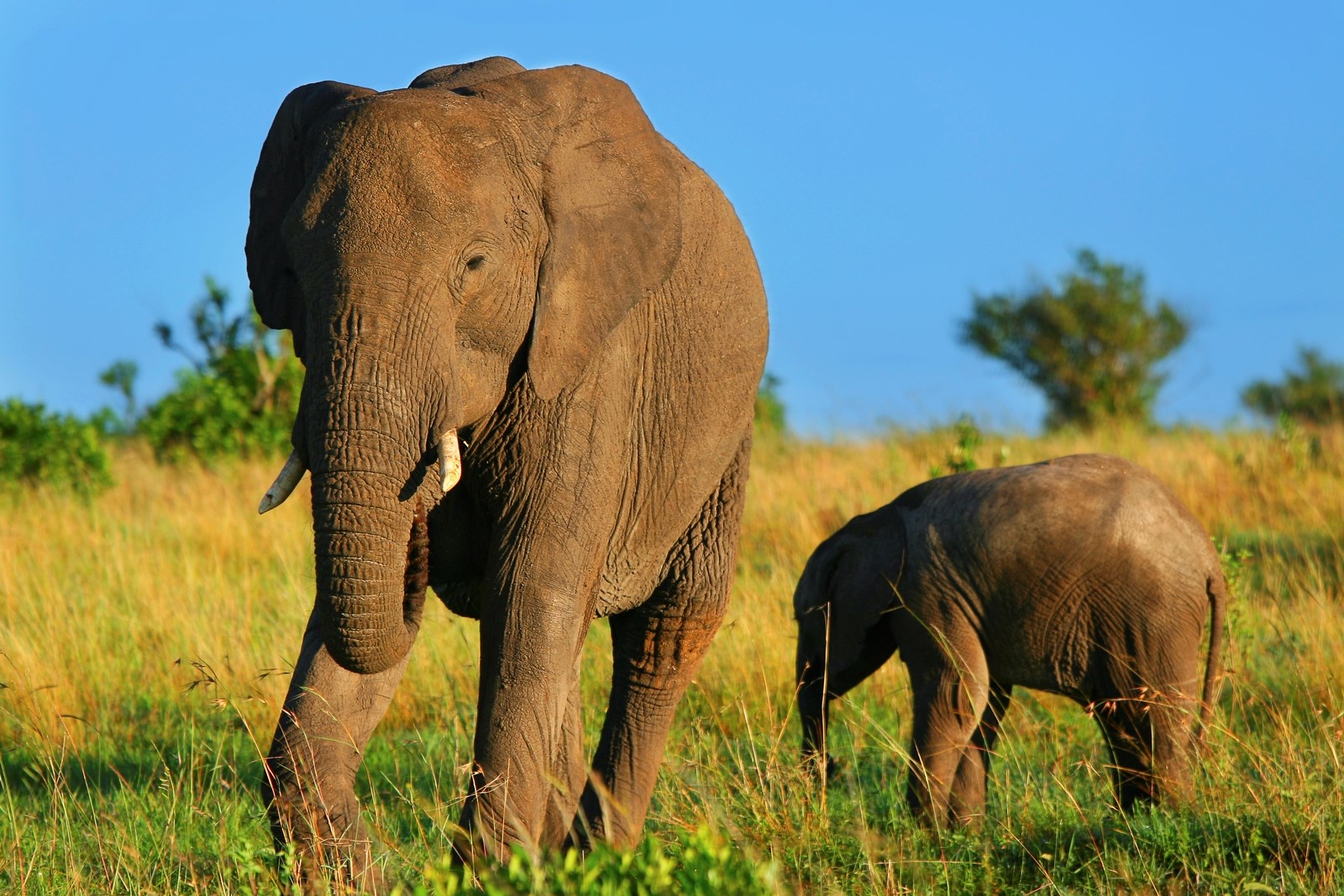 Now, after years of sounding the alarm, we can begin to celebrate World Elephant Day with “elephant optimism”. Elephant protection and management in Africa, ivory market shutdowns and crackdown on illegal trafficking abroad means the world is realizing that elephants are worth more alive.