A little more than two years ago, my team and a dedicated group of conservationists set out to count Africa’s savanna elephants, an effort called the Great Elephant Census (GEC). Our goal was to learn how many remain and where, then use the information to help protect these iconic animals from the poachers that are driving them toward extinction.

Our aerial survey – the first in 40 years – covered nearly 345,000 square miles over 18 countries, and our pilots and census crews followed strict protocols to ensure they gathered consistent data. Gathering such high-quality data is vital, because it helps us identify challenges and zero in on the most effective approaches to attacking them. This directly leads to better approaches in stopping the decimation of elephant populations.

While we are still analyzing final results and will release them in early September, preliminary numbers suggest that overall elephant losses are even greater than expected, and that poachers are killing them much faster than they can reproduce. 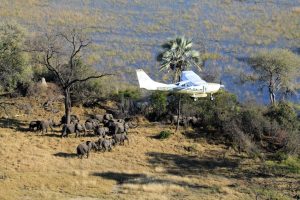 Flying over Botswana for the Great Elephant Census.

As grim as this trend is, the GEC also revealed a few rays of hope. A handful of countries are doing a pretty good job of protecting their elephants, and their approaches can serve as models for other nations whose conservation efforts have been failing. Relative success stories include Botswana, South Africa, Uganda, Kenya, and the complex of parks spanning the border of Burkina Faso, Niger and Benin.

Elsewhere, in countries where poaching is still rampant, such as Tanzania and Mozambique, the survey’s alarming results have spurred officials to strengthen protections for their surviving elephants, and to crack down on the criminal networks that are driving the slaughter. Only time will tell, though, if they can arrest both the poachers and ivory smugglers and reverse the sharp decline of their elephant populations. Still, now that we know the scope of the problem and where to concentrate more of our resources, all of us with an interest in shutting down the poachers can become more effective in our approaches.

The Great Elephant Census was a collaboration between my organization – Vulcan Inc. – and Elephants Without Borders, African Parks, the Frankfurt Zoological Society, the Wildlife Conservation Society, the Nature Conservancy, the IUCN African Elephant Specialist Group and Save the Elephants, as well as a long list of conservation officials in the countries we surveyed. Together, we have completed a Pan-African census that many predicted was unlikely to succeed, if not altogether impossible. It required technological innovation, focus and unprecedented collaboration to execute, and I thank everyone who helped make the count a success.

But even with this new hoard of data and examples of effective conservation practices across Africa, saving the elephants remains a challenge of continental dimensions. Poverty and corruption still remain very serious problems in countries that are home to the worst killing grounds, and these factors continue to drive a thriving international ivory market (along with similarly voracious demand for horns from endangered rhinos).

As you’ve been reading this, poachers likely killed another African elephant for its tusks – an atrocity that takes place, on average, every 15 minutes. In order to save the elephants, we need stronger anti-poaching patrols in Africa’s parks, more protection for elephant habitats and the political will to apprehend and sentence ivory trafficking kingpins. Yet even these vital measures are only half the equation. In addition to eliminating the supply of ivory, we also need to do a lot more to reduce the demand for ivory.

I have been encouraged by the passage of recent state ballot initiatives and legislation in Washington and Hawaii – and pending efforts in Oregon – banning trade in endangered animals and animal products, including ivory. Hopefully, all states and nations will eventually follow suit. I also strongly support President Obama’s recent ban on interstate trade in ivory. Step by step, we are curtailing the U.S. market, and I expect to see it eliminated altogether in coming years.

I was encouraged last year when President Xi Jinping and President Obama agreed to cooperate in shutting down the international ivory trade, including deliveries to China – the world’s number one consumer of ivory. This public commitment is promising, because the Chinese government has long encouraged, and even controlled, the country’s ivory trade. According to a 2015 National Geographic survey, 56 percent of Chinese polled still want to buy ivory. The survey also revealed that less than one-third believe that elephants are “very endangered.”

Given these facts, we know we have a lot of work to do to change attitudes and behavior regarding endangered species around the world, especially among Asian consumers.

With this in mind, we are currently planning the international release of the documentaries “Naledi: A Baby Elephant’s Tale” and “The Ivory Game,” which both chronicle the elephant poaching crisis and show the magnitude and mechanics of the international ivory trade. While films alone won’t turn the tide, highlighting the data and telling such compelling stories should help educate and enlist more global leaders, consumers and communities in the fight to save one of Earth’s noblest and most intelligent animals.

By any measure, time is short. In the 19th century, Africa boasted an estimated 12 million elephants. Today, that population has been reduced 97 percent and is dropping faster than ever. As you’ve been reading this, poachers likely killed another African elephant for its tusks – an atrocity that takes place, on average, every 15 minutes.

Together, we can and must save Africa’s elephants. I hope you’ll join me as we press ahead in this tough and urgent campaign.

The Ivory Game Debuts on Netflix

The Ivory Game Debuts on Netflix