From advancements in autonomous vehicles to pesticide detectors for your vegetables, here are some of the most exciting technologies and products to come out of 2018’s Consumer Electronics Show (CES) according to Jeff Kramer, Paul Allen’s tech adviser.

CES was an interesting mix of products this year, but I was really keeping a lookout for technologies that are poised to make a big impact in the reasonably near term. Paul is interested in companies and products that expand technology in ways that help everyone live better, healthier lives. In addition, I am always keen to learn more about products that demonstrate true technological leaps and have a future in the consumer market. These are the five most interesting products that really grabbed our attention at CES 2018.

Dynamics Wallet Card, Dynamics Inc.: In an incredible demonstration of how far microelectronics have come, the Dynamics Wallet Card was like the jump from clunky car phones to a sleek smart phone. Sized and weighted like a normal credit card, the Wallet Card fits working buttons, a battery, a cellular modem, an eInk screen, and charges after being flexed slightly, which also showcased its durability. In a world where it started to feel like technology plateaued in what is possible for size, it was shocking to see how far microelectronics have come and how much power can be packed into something that slides easily into a wallet. It will be interesting to see how the hardware performs, but also the data security implications of the Wallet Card, and what it means for how we will pay for things in the future. The Dynamics Payment card has signed a deal with Visa already, so consumers can expect to see this show up soon. 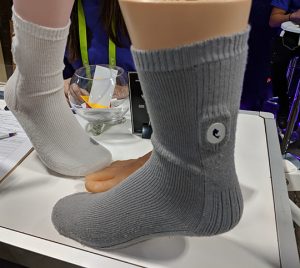 Socks that can save. Photo by Jeff Kramer.

Ulcer detecting socks, Siren: Diabetes is a debilitating disease, but outside the more well- known symptoms, foot ulcers can be especially traumatic, painful, and lead to amputations. We were really impressed the wearable features in Siren’s detection socks, tracking diabetes patients’ foot health and warning them about painful and dangerous ulcers before they fully form. The sock senses pressure changes when you walk, and the abnormalities are communicated via Bluetooth to an app. This continues the important trend of democratizing health monitoring and improving quality of life broadly, and is easy to use and apply.

Self-Driving Hardware, Nvidia: While everyone was talking about the flashy concept cars at CES, I was most impressed with what was going on inside; the hardware enabling autonomous systems coming out of Nvidia. The car is the shiny part of autonomous vehicles, but when you open the proverbial hood it’s actually the sensing and intelligence that matters. On top of incredible hardware, Nvidia is working with a company called Cognata to use simulations to train the car’s “brain”. They have also turned typical software problems you have to solve in self driving systems into prebuilt packages of software that you can simply use to build your car. Nvidia is moving from strength to strength, using their advantages in GPU hardware and software to attack new problems, pushing autonomous cars closer to an everyday reality than they have ever been. 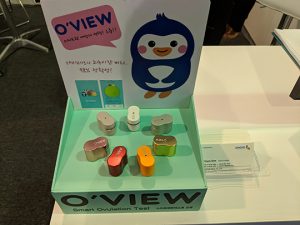 Smartphone Ovulation Detector, O’View: This one was fascinating because of its integration with mobile apps and biotechnology. Simple home health tests ease pressure on limited healthcare resources and democratize access to healthcare worldwide. The process is to get a bit of saliva on a tab and insert it into the device, which is a light and a lens, and clip it over your smartphone camera. The software detects the change in salinity during ovulation, so all the user would need to do is open the app and see if they are ovulating. The implications for the Smartphone Ovulation Detector go beyond family planning, advancements in this sort of tech is opening doors to the other types of health monitoring that marries technology with biology.

Pesticide Residue Detector, ITRI: This nifty little device was a handheld spectrometer that you submerge in your vegetable wash water, which informs consumers the quantity of pesticides left over as they wash. This product is exciting because no one wants contaminated vegetables, but also because of the future potential projects that could apply this sort of technology. One of the technology applications Paul is really passionate about is how relatively scalable technology can be used to improve health worldwide. When communities from West Africa to Flint, Michigan are facing consequences of contaminated water, this sort of technology can be a catalyst for world-changing solutions to some of our most pressing health issues.

The key takeaways from CES were that the further miniaturization of electronics enabling incredible new applications – from healthcare to payments to self-driving cars, and, in a world where smartphones are more prevalent than computers, the expansion of cellphone technologies to impact world health.

A History of Exploring and Creating Immersive Consumer Experiences

A History of Exploring and Creating Immersive Consumer Experiences

How Close Are We to a Star Wars Droid Reality?

How Close Are We to a Star Wars Droid Reality?

Entering a Golden Age of Innovation in Computer Science

Entering a Golden Age of Innovation in Computer Science