From an early age, Paul Allen’s natural curiosity and optimistic view of what was possible for the future of technology led to a partnership and a company that would change the world. Happy 44th birthday, Microsoft!

Here are some words from Paul about his memories of Microsoft; from his beginnings in his high school computer lab, to the innovations he would help launch alongside his partner and friend Bill Gates, to his visions for the future.

Paul on seizing the moment

“I was lucky to come of age in a time of fundamental change in the computer industry. Computing power, once the sole province of government and the wealthiest corporations and universities, could now be parceled out at an hourly rate. New technology delivered that power to scattered offices or schools. As usual, timing was crucial. If I’d been born five years earlier, I might have lacked the patience as a teenager to put up with batch-processing computers. Had I come around five years later, after time- sharing became institutionalized, I would have missed the opportunities that come from trying something new.” 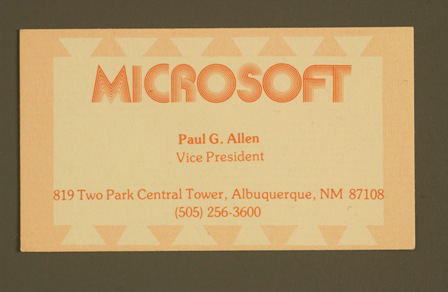 Paul on the future of computers

“I expect the personal computer to become the kind of thing that people carry with them, a companion that takes notes, does accounting, gives reminders, handles a thousand personal tasks.”

“What I…see is a home terminal that’s connected to a centralized network by phone lines, fiber optics or some other communication system. With that system you can perhaps put your car up for sale or look for a house in a different city or check out the price of asparagus at the nearest grocery market or check the price of a stock. . . .”

Bill Gates on the early days

“In fact, Microsoft would never have happened without Paul. In December 1974, he and I were both living in the Boston area—he was working, and I was going to college. One day he came and got me, insisting that I rush over to a nearby newsstand with him. When we arrived, he showed me the cover of the January issue of Popular Electronics. It featured a new computer called the Altair 8800, which ran on a powerful new chip. Paul looked at me and said: “This is happening without us!” That moment marked the end of my college career and the beginning of our new company, Microsoft. It happened because of Paul.”

When Paul and I founded @Microsoft together, we were confident that computers would change the world. But we never could have imagined how much fun we would have along the way. https://t.co/YZ3l4z94ao

“Signing that original BASIC contract was a big one for Bill and me. Now our partnership needed a name. We considered Allen & Gates, but it sounded too much like a law firm. My next idea: Micro- Soft, for microprocessors and software. While the typography would be in flux over the next year or so (including a brief transition as Micro Soft), we both knew instantly that the name was right. Micro- Soft was simple and straightforward. It conveyed just what we were about.”

40 years ago Microsoft began, what a journey! Here is the title page from Microsoft’s first product BASIC pic.twitter.com/xJyOoSq9V0

“I was drawn by nature to people who, like me, were eager to see what might come next and wanted to try to make it happen. From my youth, I’d never stopped thinking in the future tense.”

Paul’s journey may have begun with Microsoft, but his path grew beyond the lines of code, and the work to promote and grow his vision for a better future continues today.