Inspiring a New Generation of Innovators

Seattle has long been a city of innovators. From Bill Boeing’s aircraft to Eddie Bauer’s parka to the rise of global technology companies like Microsoft and Amazon, we seem driven to invent. Today, this drive is as strong as ever. Whether we’re mapping the human brain, modeling more efficient transportation networks or creating databases to help curb wildlife trafficking, computers and software are the fundamental tools that enable such progress.

Innovators are passionate about what they do and continually push themselves to get better at it. Yet before people become innovators, they need opportunities to discover what they are going to be passionate about. This is especially true when it comes to computers. While most people now use computers, only a few actually learn how they work or become fluent in the languages that bring them to life. 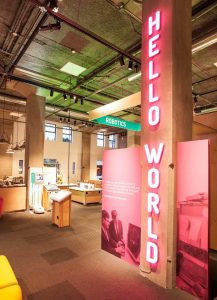 The relationship between people and their computers has never been closer, more constant or more important. And that’s one of the reasons that the Living Computer Museum is expanding to become Living Computers: Museum + Labs — an interactive hub where both kids and adults can come to experience the magic of computers and connect with these dynamic and evolving platforms.

Designed from the ground up as an interactive, hands-on experience, the revamped LCM + Labs still offers visitors of all ages the chance to type on the keyboards and flip the switches of historic computers, tinker with robots, play with virtual reality systems, learn to code and most importantly, recognize that they too can solve hard problems and have fun doing it.

In this spirit of inspiring a new sense of possibility, we aim to serve as a resource for area schools, many of which teach STEM subjects but lack the resources to introduce computer science early in a child’s education. To address this gap, we have been building strong relationships with local communities and have equipped three new state-of-the-art computer labs here at LCM + Labs for field trips, workshops and special programs. In fact, we added “Labs” to our name to reflect the expanded opportunities we offer for everyone to learn and grow, whether they’re a young student, an experienced teacher or instructor, or just someone keen to understand how computers work.

In 1967, when I was in eighth grade, I gave a speech to my classmates about “the age of the computer” and a future “that holds for us the bright prospect of even more remarkable things to come.” Today, after a half-century of extraordinary research and innovation, I believe that even more amazing prospects lie ahead and hope that LCM + Labs will inspire a new generation of technology dreamers to transform their visions into reality.

Rebuilding the Computer that ‘Changed Everything’

Rebuilding the Computer that ‘Changed Everything’