- Sunk by three Japanese torpedoes in July 1943, the Helena was located in the Solomon Sea

- Over 730 of the 900 crew aboard Helena survived thanks to help from nearby ships, two coast watchers and local natives

Few ships can claim a history like that of USS Helena (CL 50). Her distinguished and storied World War II service began at Pearl Harbor and ended in a heroic and determined rescue seemingly too dramatic to be true. Late in March 2018, the Helena was discovered by Paul Allen’s expedition crew aboard Research Vessel (R/V) Petrel.

Sunk on July 6, 1943 by three Japanese torpedoes during the Battle of Kula Gulf, the St. Louis-class cruiser was found 860 meters below the surface, resting on the floor of the New Georgia Sound off the coast of the Solomon Islands.

“We do these missions as testament to the brave souls who served on these ships,” said Robert Kraft, director of subsea operations for Allen. “Each ship has a story that touches families and friends of those who perished or survived. It’s gratifying to hear those stories each time we announce a new discovery.” 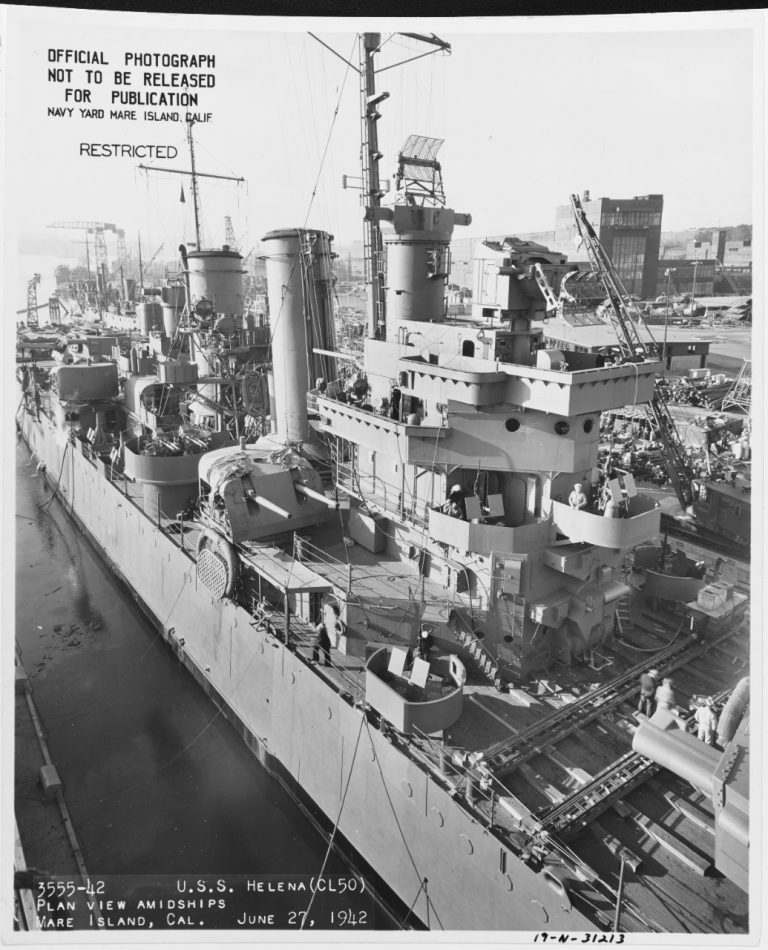 View of USS Helena’s starboard side amidships, taken at the Mare Island Navy Yard, California, 27 June 1942. hotograph from the Bureau of Ships Collection in the U.S. National Archives.

Helena’s history closes with the almost incredible story of what happened to her crew in the hours and days that followed. As various rescue efforts got underway over the course of 10 days, amazing stories of Sailor toughness unfolded in which 732 of the 900 crew survived the sinking and were ultimately rescued. When her bow rose into the air after the sinking, many of them clustered around it, only to be fired on. Two American destroyers, the USS Nicholas (DD 449) and USS Radford (DD 446) were dispatched to rescue the surviving crew.

As the sun rose, the enemy remained within striking distance, and the two American vessels suspended rescue operations to pursue the Japanese. The survivors were amassed into two groups.

The first group of about 275 survivors was aided by volunteers and small boats left on scene by the two destroyers. Helena’s commanding officer, Capt. Cecil, who survived the sinking, organized a small flotilla of three motor whaleboats each towing a life raft, carrying 88 men each, to a small island about 7 miles. This group was rescued the next morning by USS Owin (DD 433) and USS Woodworth (DD 460). 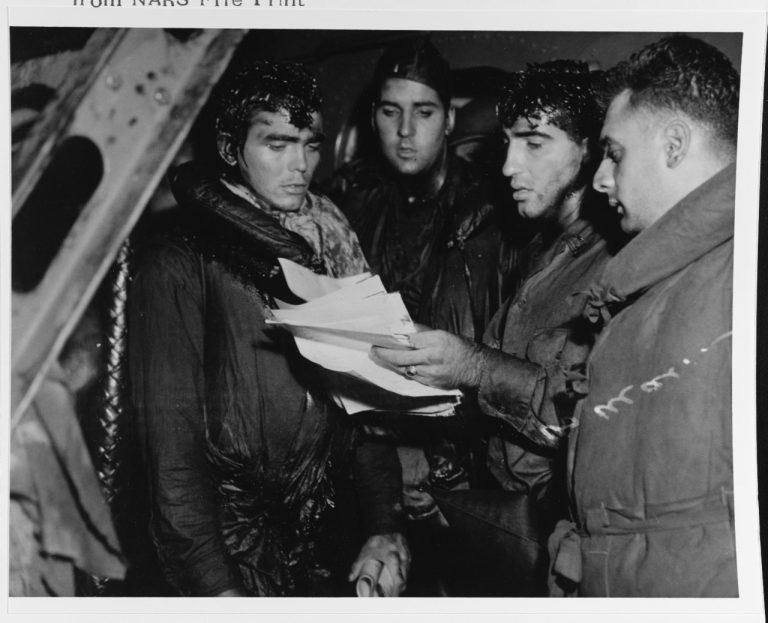 Wet and oil-covered survivors of USS Helena go over papers after their rescue from the waters of the Central Solomons, 6 July 1943. Official U.S. Navy Photograph

The second group, numbering nearly 200, clung to the slowly sinking bow of Helena. When things were looking bleak, a Navy Liberator dropped lifejackets and four rubber lifeboats. The wounded were placed aboard the lifeboats, while the able-bodied surrounded the boats and did their best to propel themselves toward a nearby island. Wind and current, however, carried them away from the island, and ever further into enemy waters. American search planes who eventually arrived could not locate the drifting flotilla, and some of the wounded began to perish under the harsh circumstances. Another night passed, and in the morning the island of Vella Lavella was within reach. Survivors landed safely on the island. Two coast watchers and local natives cared for the survivors as best they could, and radioed news of them to Guadalcanal. The remaining 165 Sailors took to the jungle to evade Japanese patrols. Finally, Nicholas and Radford, augmented by USS Jenkins (DD 447) and USS O’Bannon (DD 450) set off July 15, 1943 to sail further up the slot than had been attempted before. On the night of July 16, the rescue team brought out the 165 Helena men, along with 16 Chinese who had been in hiding on the island.

Helena started with a crew of 900 men. All but 168 had survived the sinking and eventual rescue.