Driven by Paul’s passion for history, the team on the R/V Petrel continues to explore our vast oceans, seeking to discover and preserve lost history. Most recently, the crew on Petrel located the USS Hornet, a U.S. aircraft carrier that played a critical role in WWII, and were able to offer 95 year old veteran Richard Nowatzki a look at the very gun where he once stood. He joked that he wondered if the forty dollars in his locker aboard the wreck of the Hornet was still there (you can watch the interview and see a tour of the wreck here).

Over the years Petrel (and before that, Paul’s M/Y Octopus) explored and discovered historic sites in waters across the globe. From small, poignant reminders of the human cost of war to incredible creatures rarely seen by the human eye, here are some of the best images from those projects and discoveries.

10. Two Douglas TBD-1 Devastators resting on top of each other at the site of the USS Lexington 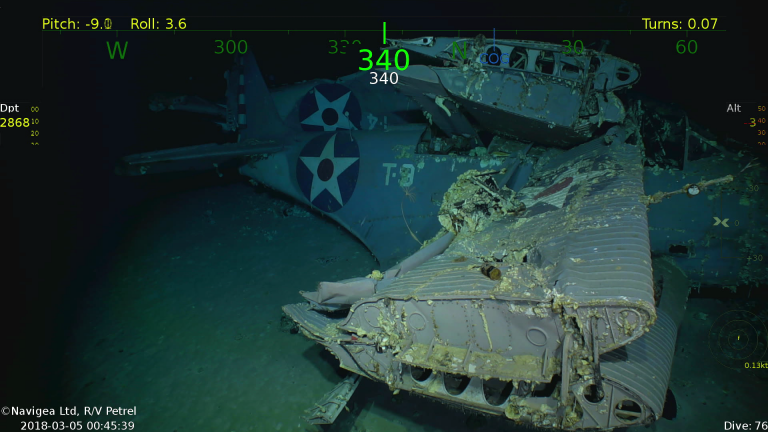 9. Swimming sea cucumbers at the site of the USS Helena 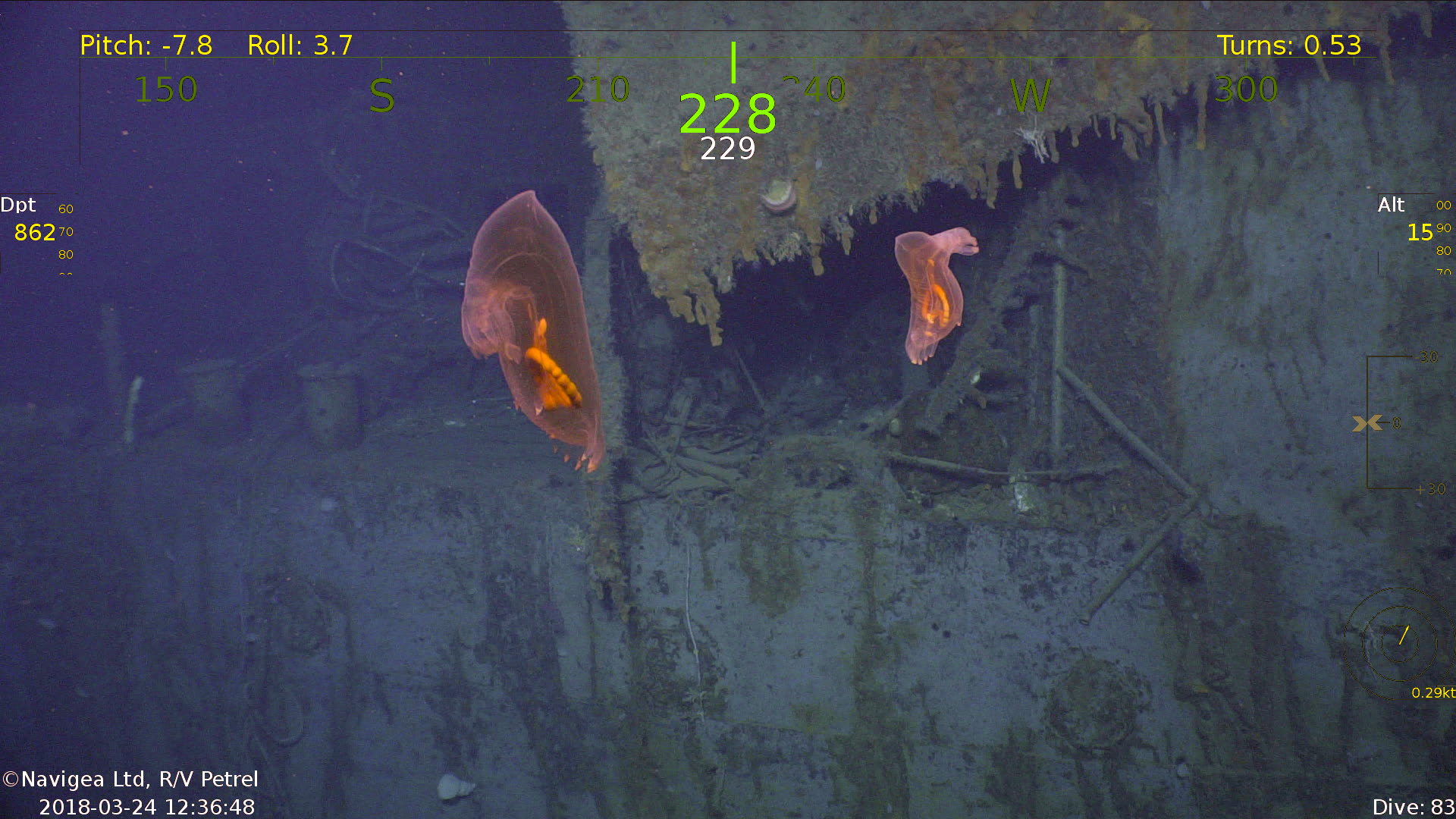 Alongside members of the Royal Navy, in 2012 the team deployed Octo ROV on a mission to raise the bell of the HMS Hood so it could be restored and displayed in the Navy’s National Museum as a permanent memorial. The mission looked simple on paper: like an arcade crane game, the crew fitted the ROV’s arm with a hook to drop down and pull the bell up. However, the unpredictable weather of the North Atlantic, coupled with heavy underwater currents jostled the ROV, forcing them to abort the first attempt.

In 2015, the team returned to the Denmark Straits to retrieve the Hood Bell with a new state-of-the-art ROV. This mission was successful, and the bell was pulled from the murky depths. After nine months of painstaking restoration, Princess Anne struck eight bells in a ceremony at The National Museum of the Royal Navy in Portsmouth Historic Dockyard as the descendants of the 1,415 sailors looked on.

7. LIVING DINOSAURS OF THE DEEP

In 2011, Allen and his sister Jody teamed up with marine biologist Hans Fricke to unravel the mystery of the coelacanth–one of the oldest and most endangered species on the planet. Thought to have gone extinct with the dinosaurs 65 million years ago, the fish “returned” when South African fishermen caught one as by-catch in 1938. Though coelacanth specimens have been studied before, what made this expedition unique was that it allowed the world to experience the coelacanth in its natural habit—deep, dark caves up to 700 meters below the sea. Known as “living fossils” because of evolutionary characteristics left behind by modern-day fish (hollow tail spines, unique fin coordination, and armored scales), the search for the coelacanth filled gaps missing from the fish’s 65 million (and counting) year story. 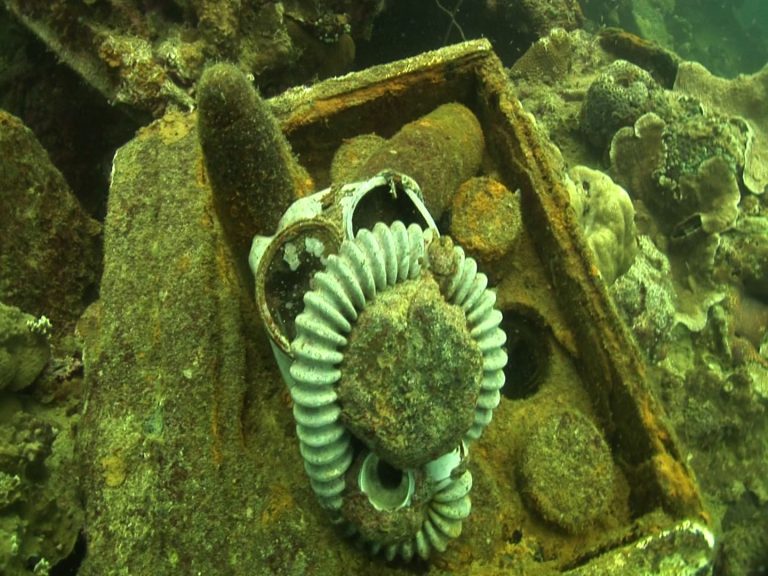 In the wake of World War II at the onset of the Cold War, the United States conducted 67 nuclear tests on the Bikini Atoll in the Marshall archipelago. The goal of the tests was to further understand the power of the country’s newest weapon, the atomic bomb, and also display its might. The US brought more than a hundred different ships, tanks and other armor to the atoll to see how they would survive nuclear attacks. The debris left behind painted a chilling picture of our past, but the resilient coral and marine life that survived give hope for the future.

5. Instruction manual from the IJN Musashi 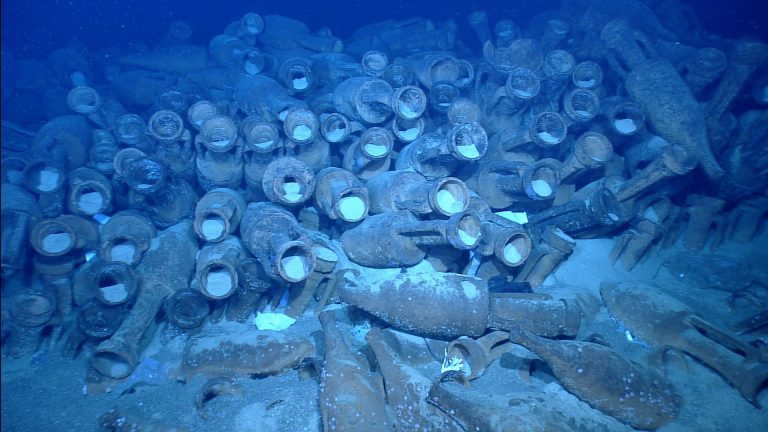 Although not much is known about the origins of this 2,000 year old ship off the coast of Corsica, its cargo of hundreds of amphorae, long-necked ceramic jars, spilling out of its rotted wooden hull shed a little light on its story. 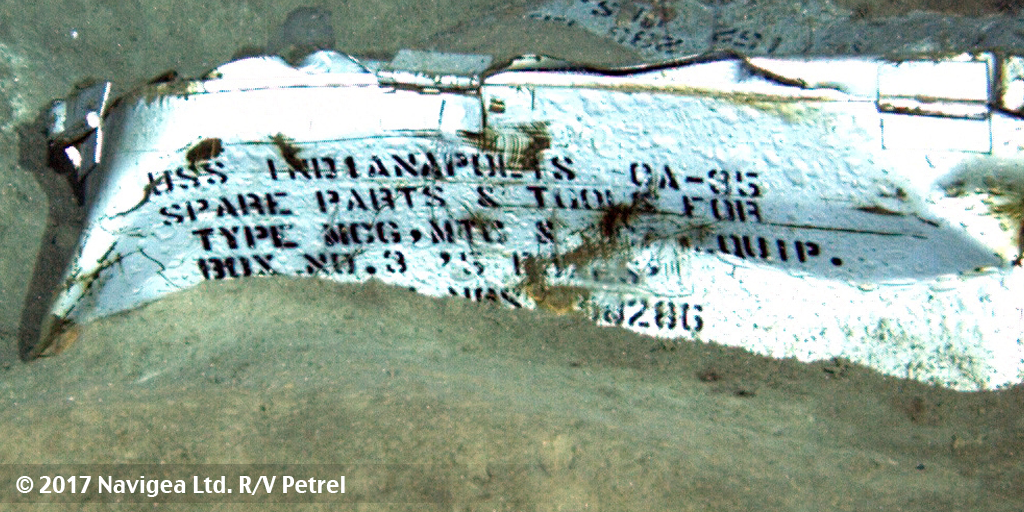 The team on Petrel discovered the wreckage of the USS Indianapolis on August 19, 2017 5,500m below the surface of the Philippine Sea. The clarity of the images from this historic, solemn wreck were incredible and a heart-wrenching reminder of a devastating loss. During the exploration, the ROV captured images of a spare parts box with USS Indianapolis clearly legible despite spending 70 years 16,000 feet deep. The documentary “USS Indianapolis: The Final Chapter” chronicled the discovery, and the film was screened by three survivors of the Indianapolis (CA 35) and the crew of a modern littoral combat ship USS Indianapolis (LCS 17) that will share its name. 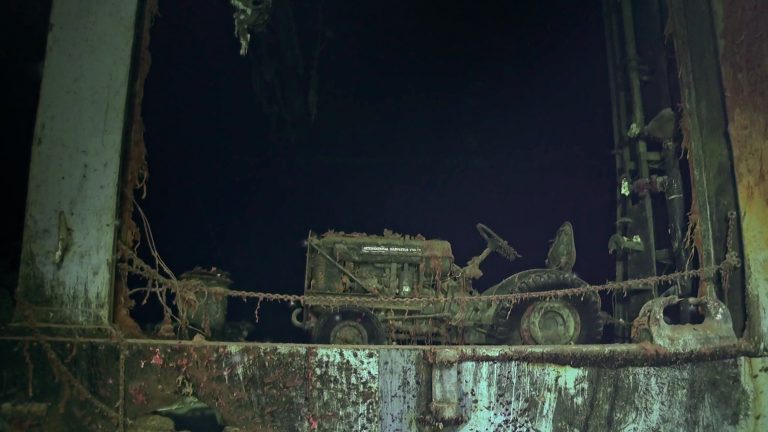 An International Harvester aircraft tug sits upright in its hangar on the USS Hornet.

1. THE HUMAN COST OF WAR 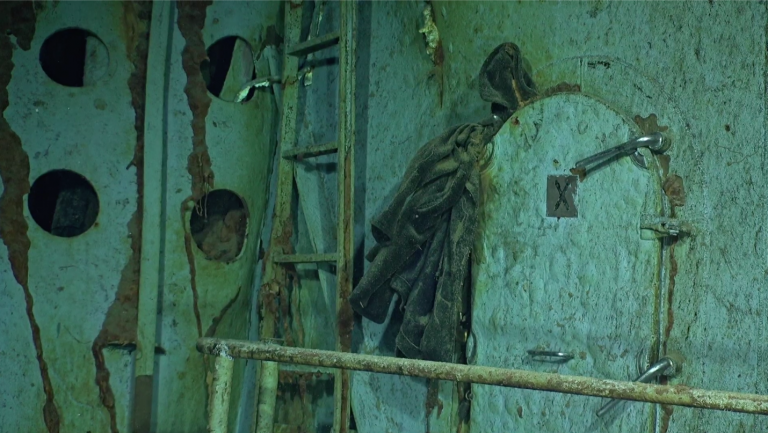 What we initially thought was a seaman’s coat, we discovered was a black-out curtain upon further inspection. However, artifacts like this remind us all of the human cost of war. This is what drives the crew of the Petrel to continue to explore and discover, to help us preserve the memory of the sacrifices made by so many over the course of history.