How a Visit From R/V Petrel Is Inspiring These Children

“It was very special that you came to our classroom. I am so fascinated. Sincerely, Isabella.”

That was just one card of many left for the crew of Research Vessel Petrel after a recent visit to Ms. Kelly Sullivan’s third-grade class in Waterloo, Iowa. The trip to Iowa’s heartland was an exclamation point on several years of important discoveries for the crew of Petrel.

On St. Patrick’s Day in 2018, Petrel first discovered wreckage from the USS Juneau (CL-52) resting more than 13,000 feet below the sea, just off the coast of the Solomon Islands. The Juneau was sunk by a Japanese torpedo during the Battle of Guadalcanal in World War II, ultimately killing 687 sailors including five brothers – George, Francis “Frank,” Joseph, Madison “Matt,” and Albert Sullivan from Waterloo. 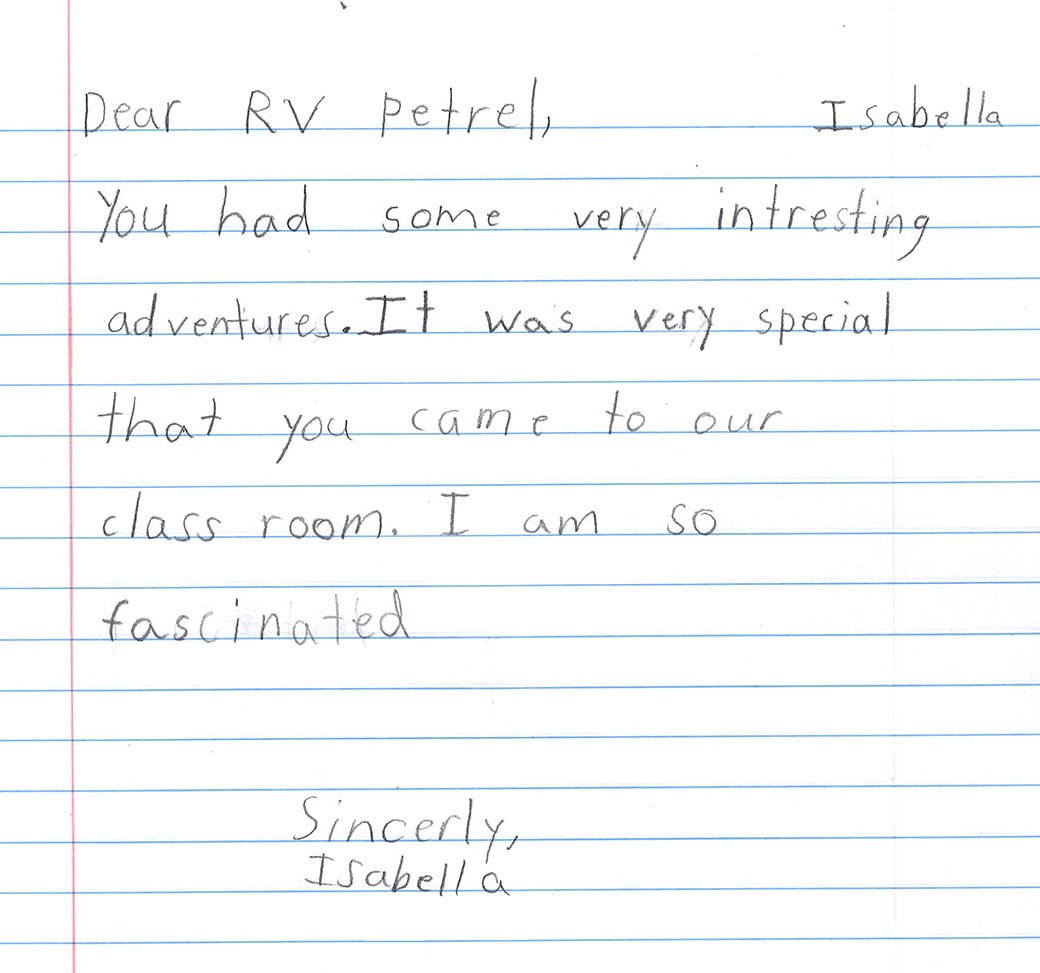 A letter from one of Ms. Sullivan's students to the crew of R/V Petrel

News of the deaths of the Sullivan brothers became a rallying cry for the war effort inciting “a wave of humility and sympathy” for the Sullivan family according to Navy historical website. War bond drives, posters and even a 1944 film, “The Sullivans,” followed. It was – and remains – the greatest wartime sacrifice by any American family.

“The discovery of USS Juneau was very bittersweet for the family,” said Sullivan, the granddaughter of Albert Sullivan, the youngest Sullivan brother. “It was wonderful to actually see the final resting place of the five boys. In a way it also helped give us closure.”

More than seven decades later, the incredible loss of one Waterloo family is still seared into fabric of the city. The town’s convention center and veterans’ museum are both named after the brothers. Even a local concrete mixer bears their image, reminding locals of the Sullivans’ service and sacrifice.

“Our founder, the late Paul G. Allen, tasked us with a monumental mission – discovery, education, history and honoring service members, all of which touches multiple generations and the lives of families who made the ultimate sacrifice,” said Director of Subsea Operations Robert Kraft. “It was our honor to live out this mission in Waterloo.”

Sullivan first watched the video of the discovery of USS Juneau with her third-graders nearly two years ago. But, even today, her students are captivated with the discovery of her grandfather’s final resting place.

“It opened up a huge interest in science, technology, history, and marine life for my students,” said Sullivan. “It thrills me to know that the crew’s visit to my classroom may have ignited some great careers for these children.”

For Mayer and Kraft, their visit to Ms. Sullivan’s third-grade class was another reminder of why these expeditions matter.

“The depth of the appreciation from these families is extremely humbling,” said Mayer. “Meeting the family members from some of the ships we have found provides motivation to find more ships to hopefully give a sense of closure to more families.”

After their experience in the classroom, it’s clear that the Petrel’s expeditions don’t just bring closure for just families, but entire communities.

Deep Data: Tracking Climate Change From the Bottom of the Ocean

Deep Data: Tracking Climate Change From the Bottom of the Ocean