Shark attacks get all the headlines. Less appreciated until recently is just how much trouble many species of sharks are in. So are their close relatives, the rays. A quarter of species are at risk of extinction, 100 million or more sharks are removed from the oceans every year, and many of the largest species have declined 90 percent or more and likely no longer fill their past ecological role.

This is something we should care about. Although much remains to be learned about the importance of sharks to marine ecosystems, what we do know suggests that losing sharks could be bad for oceans and people.

For example, studies in the vast seagrass meadows of Western Australia have revealed tiger sharks, which still patrol the waters in large numbers, are a keystone. Tiger sharks hunt the shallow seagrass beds, causing some of their favorite prey – the dugong (a sea cow) and green turtles – to largely avoid these areas or to graze the grasses in a way that puts them at less risk and does less damage to the seagrass beds. 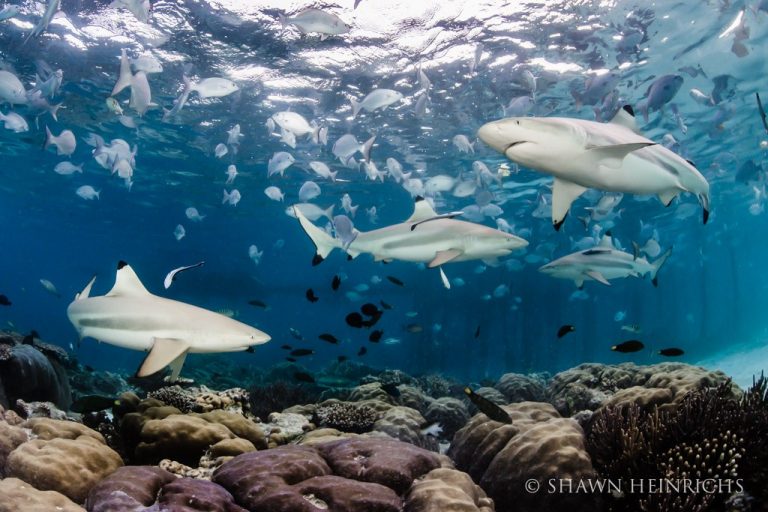 This allows huge pastures to develop with tons of habitat for fish, crabs, and shrimp that grow up to be caught by fishers and support a thriving ecosystem. The fully developed seagrass beds also trap carbon dioxide (in the form of seagrass and dead seagrass in the sediment), meaning that sharks and climate change are linked. Recent studies suggest that if tiger sharks were lost and the seagrass beds were stressed, the big grazers could cause the entire ecosystem to shift to one with closely cropped seagrass that provides little food or shelter for small animals and poor stores of carbon. Tiger sharks have a strong influence on the quality of the ecosystem even without eating many turtles and sea cows. The mere presence of large sharks acts to shelter the seagrass by dissuading hungry grazers from feeding, much like the return of wolves has resulted in increased ecosystem diversity by causing deer and elk to shift where and how they forage.

Many of the species threatened by overfishing live in coral reefs, which are stressed themselves by warming temperatures, pollution, and outbreaks of crown-of-thorns starfish that can devastate reefs. Just recently, the National Oceanic Atmospheric Administration (NOAA) declared the third-ever global bleaching event likely over, but coral reefs continue to face serious threats. Is the presence of sharks important to ensuring that these reefs can rebound? Probably.

On reefs, sharks play important roles in both the middle and top of the food web and likely influence how heavily reefs – and the algae that might overgrow them – are grazed. The threats to reefs, their economic importance (possibly more than $100 billion a year or more), and risks to fish, sharks and rays that inhabit them are among the reasons my colleagues and I are working on the Global FinPrint project. Through this program, made possible by Paul G. Allen Family Foundation and Vulcan, we will be able to unravel when, where, and how sharks are important to reef health. More importantly, we will determine where we need to act to protect and rebuild shark populations to ensure thriving reefs for generations to come.

Finally, when considering why we would want to protect sharks I can’t help but think of a remark by conservation biologist Dr. Laurence Frank when he was asked why he worked so hard to ensure that lions would not go extinct. A world without lions, he reflected, would be a very sad place. For me, the same holds for sharks. The oceans are simply a better place when they have these amazing animals in them.

Article written by Dr. Mike Heithaus, Dean of the College of Arts, Sciences & Educations (CASE) and Professor in the Department of Biological Sciences at Florida International University (FIU)