Sharks and rays have been some of the most dominant predators in our oceans for more than 400 million years. But now an even more prodigious hunter is eclipsing them – us. As a result, sharks and rays are vanishing, killed for their meat and to provide products ranging from shoes to traditional medicine. Because of low reproductive capacities and an inability to withstand heavy fishing, this group of fishes could disappear in just a few decades.

We are regularly reminded of their dire situation by scientists, advocacy groups and the media. What tends to slip through the cracks, however, are the rare slivers of hope. Coastal sharks and rays are doing well in the US, Australia, Canada and New Zealand. These nations have implemented conservation measures that enable fishermen to maintain modest catches that can be sustained in the long-term for some species. Yet nearly everywhere else sharks and rays are fished, they are in serious trouble. 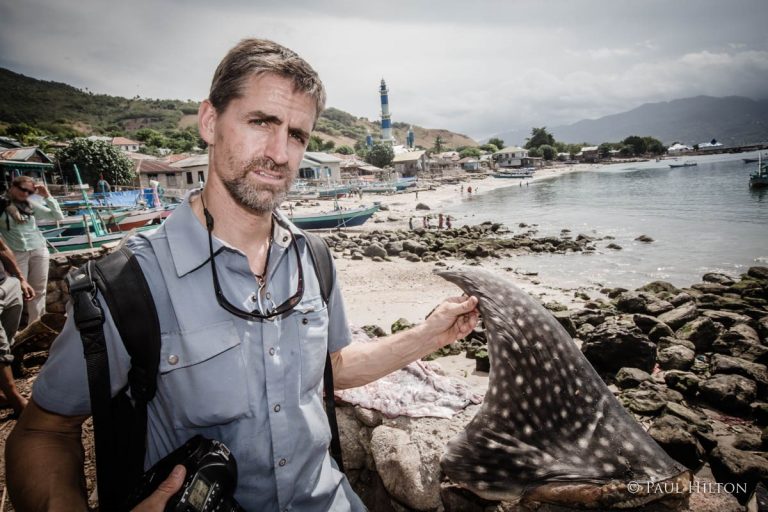 Cinematographer and photographer Shawn Heinrichs poses with a shark fin. The shark finning practice has been a key contributor pushing sharks to the brink of extinction.

We don’t know what conservation strategies will work in countries without the means to manage their shark and ray fisheries the same way wealthy western countries do; what circumstances will make them effective or where to focus limited resources to maximize conservation.

Should we invest in numerous small protected areas, as seen along the Belize Barrier Reef? Should we close off entire countries to shark fishing, following the lead of the Bahamas and Palau? Should we encourage community-based ocean stewardship, as seen in many coastal villages in the South Pacific? Or should we encourage shark fishers to become shark tour operators to boost the economy like Beqa Shark Divers has done in Fiji?

To develop a global strategy, we must answer two important questions:

We need to know what local conservation tactics are working and could be expanded into regional and global strategies. To answer these questions, we must count sharks and rays in many places around the world – something that is extremely difficult to do, not because they’re dangerous and scientists must risk life and limb to study them, but quite the contrary. Sharks and rays are afraid of humans, so when divers jump into the water, they often swim in the opposite direction. Remote counting is better. But how? And how can we do this in a way that enables all places to be compared?

The answer is Global FinPrint, a Paul Allen-funded initiative that brings together a team of international researchers and collaborators. Global FinPrint launched in summer 2015, with the team conducting surveys in tropical coastal habitats using baited remote underwater video surveys (BRUVs). BRUVs are underwater cameras placed on the sea floor in front of a small amount of bait. The bait encourages passing sharks and rays to swim into the field of view, enabling us to compare the numbers seen per hour in different places. Although it doesn’t facilitate accurate counts, this methodology allows us to discover where populations of sharks and rays are stable and where they are declining. 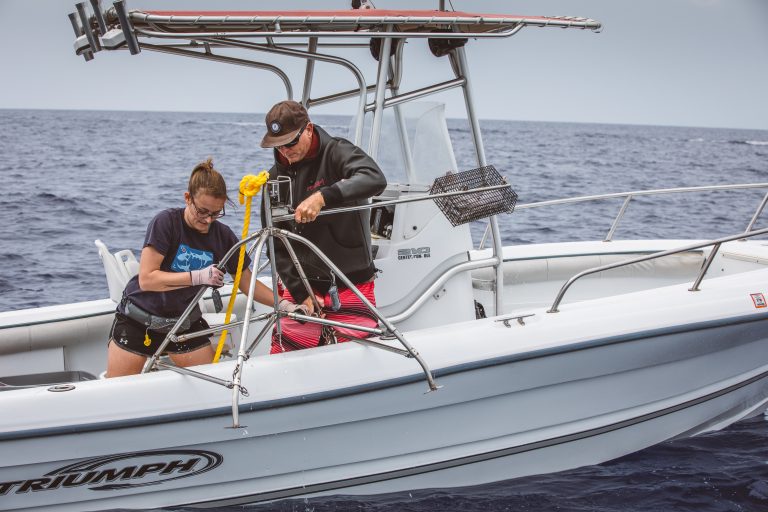 The Global FinPrint team sets a BRUV in Hawaii.

Early findings indicate it’s not all negative. There are several locations where sharks and rays are common. These hotspots are often protected or inaccessible areas where the pressures of fishing are low, and may be the last places on the planet to harbour pristine numbers of sharks and rays. We are also discovering areas where it is still possible to find some of the most threatened species of sharks and rays.

Strongholds of endangered great hammerheads have been discovered in the Bahamas, the Northern Great Barrier Reef, Palau, and Tobago. Vulnerable wedge fishes have been seen at Ashmore Reef in northwest Australia, the northern Great Barrier Reef, Mozambique and elsewhere. We are working with local collaborators and governments to share this information to help protect these important ocean environments and species.

I am most excited about the areas that surprised us – places where we thought sharks and rays may have already been over fished, but for whatever reason, we are seeing them on BRUVs. These bright spots are a mystery in need of solving. Is it high productivity, ideal habitat, or plenty of food that enables these animals to have higher reproductive capacity to keep pace with fishing? Is it a local conservation measure? Or is it a combination? Solving these mysteries will give us a chance to learn effective conservation practices, some of which could be put into practice elsewhere.

The very existence of these bright spots gives me hope that sharks and rays can thrive alongside humans. We just need to use the lessons from these areas to light our way.