It was an unprecedented and risky mission — deploy autonomous Seagliders, an undersea drone, to explore underneath an ice shelf in West Antarctica. In January 2018, two team members released an array of robotic instruments off of Korean Polar Research Institute’s icebreaker RV Araon, thanks to support from the Paul G. Allen Family Foundation, to gain a better understanding of how climate change is affecting the loss of massive ice sheets and contributing to sea level rise. After witnessing multiple forays of up to 140 kilometers (nearly 87 miles) under the Dotson Ice Shelf and even the Seagliders navigating into, and more importantly out of, ice crevasses, the scientific teams from the University of Washington and Columbia University are celebrating the success of the initial year of the mission.

We caught up with Dr. Pierre Dutrieux, assistant research professor from the Lamont-Doherty Earth Observatory at Columbia University, who recently returned from the Seaglider deployment to get his observations on this important mission.

Describe the current status of the Seaglider mission?

Now that the sea ice has formed, satellite communications won’t be possible until at least November. The Seagliders will remain primarily in “loiter” posture to preserve battery life, automatically activating to survey along the front edge of the ice shelf roughly once per month so we can observe the seasonal variation. These data will be stored onboard the sea gliders until the sea ice breaks up and they are able to communicate back to our receivers stationed at the University of Washington. 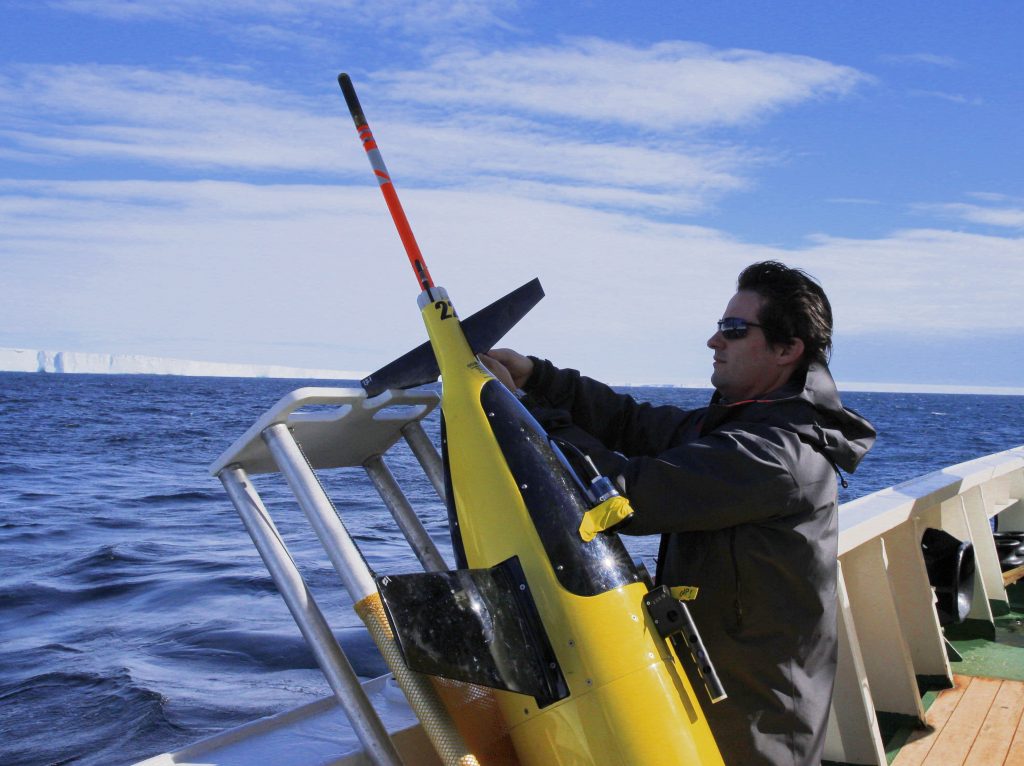 Dr. Pierre Dutrieux working on one of the three Seagliders deployed in West Antarctica.

Is it fair to say this is the longest duration mission ever conducted in the region?

There have been some static moorings deployed for up to a few years, but this is the longest deployment of a mobile sensor platform in this region. This is important. This allows us to collect data in similar locations over time to determine which characteristics are long-standing and which are ephemeral — varying by the hour, the day, or the season. Having the ability to make these observations under the ice is amazing.

When do you expect to report the first findings of your research?

The bulk of our findings will come after we recover and analyze the full complement of data at the end of this year, after the sea ice breaks up. There are a few interesting results already, however. Based on some pre-existing bathymetry (seafloor topography) data covering the area underneath the Dotson Ice Shelf, it was understood that a 200 meter high ridge existed a few kilometers under the shelf and we were expecting some challenges maneuvering the Seagliders over this ridge. Turns out the ridge wasn’t there at all — the airborne technique (using gravity measurements) produced a data artifact that was misinterpreted as a ridge.

So, what does this mean?

This finding will likely force the scientific community to reexamine our assumptions about under ice bathymetry and our techniques for measuring it. This is important if you’re an ice modeler because you want to know what features might be impeding the downslope movement of a particular ice sheet and these major seafloor features are critical to that. Similarly, if you’re an ocean modeler, you want to understand the ocean currents, which are also influenced by the details of the bathymetry.

We need to clearly improve how we are collecting these data. 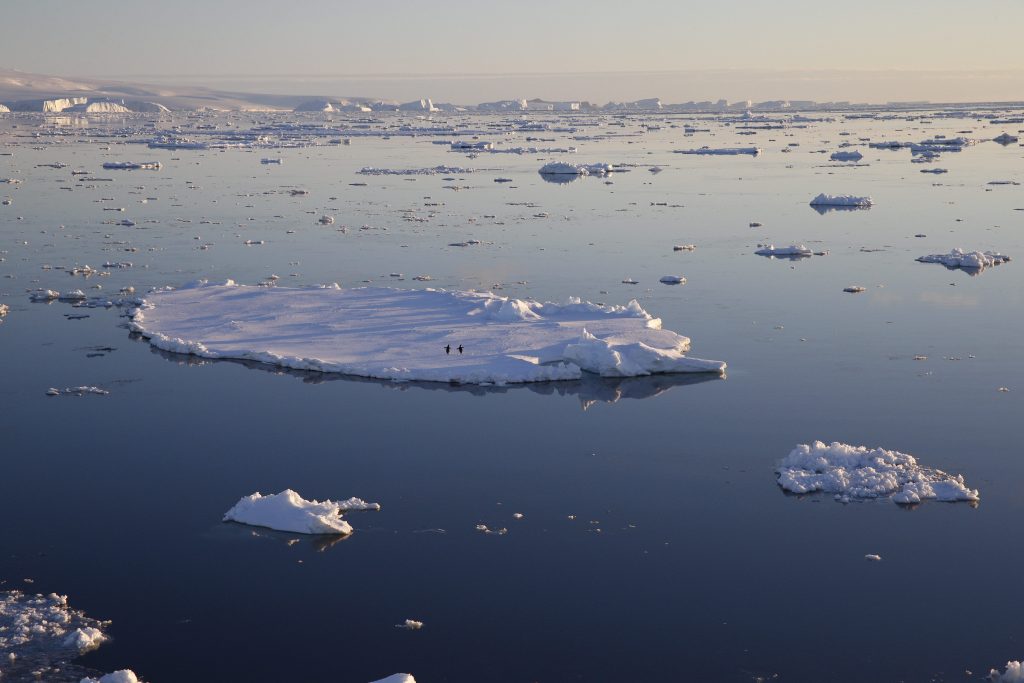 Have you been surprised by how well the mission has gone?

The Seagliders performed almost exactly as expected; however, in my experience, anytime you do work in the field there’s always something that goes wrong—something that you didn’t plan for, particularly when you’re operating in a totally new environment like this. And so far in this mission, nothing unexpected actually happened, which surprised us.

What’s the significance of this project for you as a scientist?

This technological development opens new doors for exploring ocean worlds under remote ice shelves, one of the last frontiers on our planet, over relatively long periods of time. This is very exciting!

What’s next for the Seagliders?

Seagliders have been in widespread use for ocean observing for over a decade, but operations under ice shelves represent a new frontier. We intend to make a strong case to funding agencies like the National Science Foundation to extend their use in these environments. A strong case can also be made to push the technology further to lower the instrument and logistics costs of such platform deployments, making it a truly accessible and revolutionizing tool for under ice and remote environment exploration. 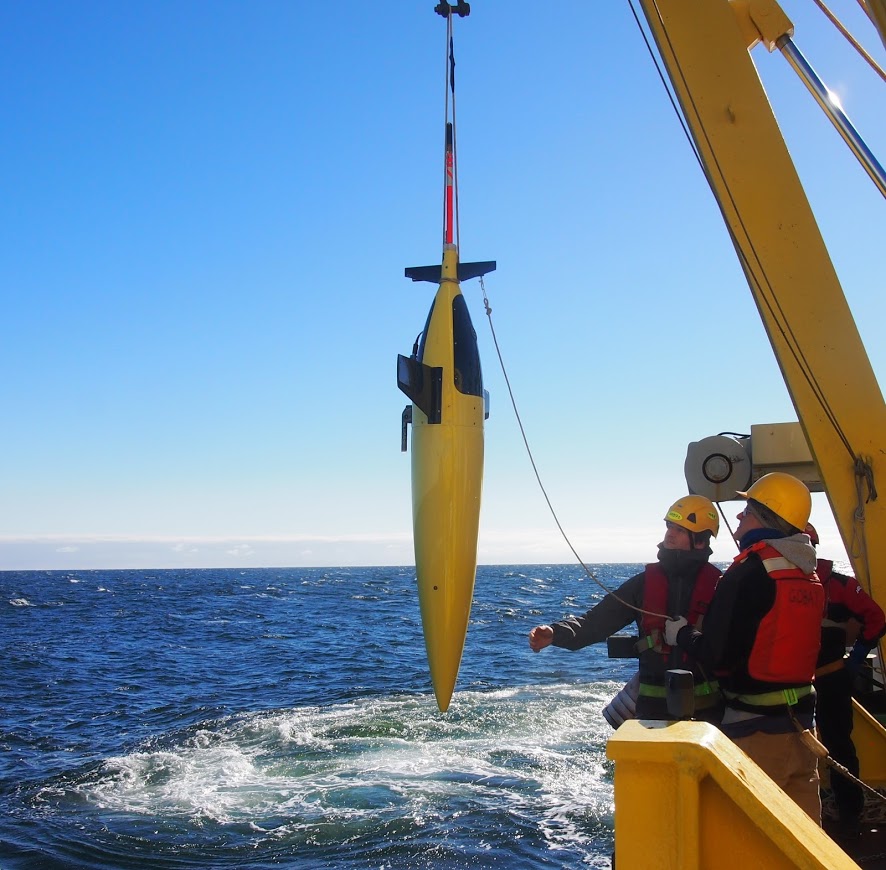 Crew of RV Araon lower one of the Seagliders down into the water.