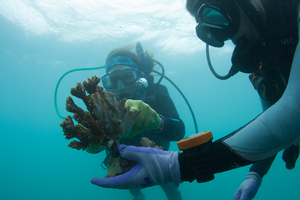 Dr. Ruth Gates is Director of the Hawaii Institute of Marine Biology and Principal Investigator for the Gates Coral Lab. Her work focuses on coral reefs in the Pacific Ocean and their biology. In 2013, she won the Paul G. Allen Ocean Challenge and is in the middle of a four-year research project that uses assisted evolution to grow “super corals” that can survive the effects of climate change. She was most recently featured in Netflix’s Chasing Coral.

We sat down with Dr. Gates to talk about her passion for coral and her role in making an impact on what is a dramatic global issue – coral bleaching due to warmer water temperatures and ocean acidification. Read more about Dr. Gates at Gates Coral Lab.

What is the current state of corals across the globe?

Unfortunately, the world’s coral reefs are really in trouble. In the last 30 to 50 years, we’ve lost 50 percent of the reefs in the world. So just pause for a minute and think about what that means. Half the world’s corals have died and they’ve died in response to warmer than normal water temperatures. Last year you will have heard about the bleaching on the Great Barrier Reef. Bleaching just means stress response in corals, and bleached corals are sick corals that often die. So half the world’s corals have died in the last 50 years. Twenty percent of them died last year.

What gets you most excited about coming to work and talking about your efforts to save corals?

Corals themselves. I don’t know if you’ve ever been on a reef, but honestly it is one of the most ethereal places. You sort of feel you are in a structure that’s bigger than you, is larger than life. It’s really amazing the amount of energy on the reef. There’s fish coming in and out. A healthy coral reef is like no other place in the world. I love the organism. The corals themselves are really complex. They’re ancient organisms. They’ve been on the planet for over 200 million years. 200 million years! That’s crazy, right? They have these tiny plant cells that live inside their tissues. In fact, inside the animal cells are tiny plants and those plants feed the coral. I mean that’s exquisite biology. And it was that intimate association between these tiny plants and the animal that really got me excited when I was a student, and it’s that relationship or symbiosis that I’ve studied my entire career.

What can you tell us about the technology you are using in your research?

When I started studying we had microscopes that allowed us to sort of view into the world of the cell. So I would spend hours in dark rooms looking down microscopes. I love it. There’s so much down there to see. Those microscopes have transitioned from scopes that really imaged dead things. So you would take an animal, you might fix it in a fixative and then you slice it with a glass knife, and you’d put a section on a slide and look at that section of the organism. Today there are microscopes that allow you to image at exactly that same resolution in as much detail but with the whole living animal. So I can put a coral under these live imaging scopes, and I can watch it behave instead of just seeing a static image.

I can watch it behave, and then I can simulate a future ocean condition – a warmer and more acidic condition around that organism on the microscope slide and watch it react. I mean that’s crazy stuff, right? We can also use sensors out on the reef. So there are these very, very sensitive instruments that allow you to measure temperature and the chemistry of the water and how much oxygen is in the water. Those instruments can measure every second of what’s going on around a coral reef. The data from those sensors can be fed to a little aerial that pings the data straight back to my computer, and I can watch that in real time sitting in my office. I can see what is going on on the reef. We have time lapse cameras that allows us to watch the reef. It’s astonishing the technology. We can image the reef from airplanes and satellites. It’s really unbounded at this time how much you can visualize in the biological world.

What would you recommend we do in our daily lives to stem the loss or support the survival of corals?

We can all play a part in a solution to the problem on reefs and the solution for the planet. It really depends on what you want to do. We’re all discussing green energy, the move towards electric cars, the embracing of solar technology that is a much cleaner source to offset the burning of fossil fuels. If you’re somebody who’s politically active you could lobby your local politician to support all action that would advance an agenda that would really help protect the coral reef. Maybe you’re somebody who wants to go out and clean up a beach because everything that we take off that beach will no longer wash onto the reef and potentially damage it. Maybe you’re a boater who drops an anchor, and instead of dropping an anchor you could talk to your local managers and ask for them to put a permanent mooring in so that when you tie up your boat you don’t drag your anchor across a reef. I think what I always say to people is choose a solution that is best for you. And start doing it.

What makes you most optimistic about the work you are doing?

I’m a believer that people can pretty much do anything. Unfortunately, we seem to prefer to fix problems than to stop the problem in the first place. But we have a problem. It’s a challenge and there are many young scientists who are committed to solving the challenge of “can we save the reefs?” I’m really invigorated by the energy from the young scientists I work with. I’m invigorated by the amount of creativity that a problem of this magnitude forces in the scientific communities. I feel we can solve any problem. But to do that we have to collaborate with people that we potentially don’t usually work with. It forces us really to change the way we as scientists do business, I think. To me that’s a very exciting framework.