Our world’s oceans are in deep trouble. They are growing warmer. They are becoming more acidic. Coral reefs are dying. And in the past 40 years, overfishing – much of it illegal – has claimed roughly half the fish in the ocean. Unless we change course, the marine ecosystems that 3.5 billion people rely on for food and for their livelihood could collapse in our lifetime.

As dire as this prospect may seem, we still have time to change trajectories – but only if enough people become more aware, pressure their leaders to strengthen policies that protect marine life, and make smart and sustainable consumer choices. That’s why I believe Ocean Warriors, a six-part documentary airing in the United States on Animal Planet beginning December 4, is so important.

Many people think of our oceans as endless, and of humans as insignificant actors in the vast natural world. As Ocean Warriors reveals, the opposite is true: widespread illegal fishing is devastating our oceans, and only significant human intervention can turn the situation around.

Co-produced by Vulcan Productions, this series tells the true stories of courageous activists and officials – from Africa to Antarctica to Asia – who risk their lives to identify and stop the illegal, industrial fishing syndicates that are strip-mining our oceans of life.

Each year, illegal, unreported, and unregulated fishing claims up to 26 million tons of sea life – an unsustainable catch that, if left unchecked, threatens our oceans beyond recovery. Currently, at least one in five fish are caught illegally, feeding a black market in seafood worth an estimated $23 billion annually.

Illegal fishing takes an especially acute toll on sharks; illegal trawlers kill an estimated 100 million every year – often for their fins alone. Some shark species have already suffered a 90 percent decline; left unchecked, these ominous trends could soon lead to extinction. Ocean Warriors brings this crisis to life. Viewers see a fishing vessel from the Philippines whose hold is filled almost entirely with severed fins, the crew having already tossed the rest of the animals overboard – finless and bleeding – to die. But without evidence to prove where exactly the sharks had been caught, fisheries officers from Palau were required to let the trawler continue on its way. 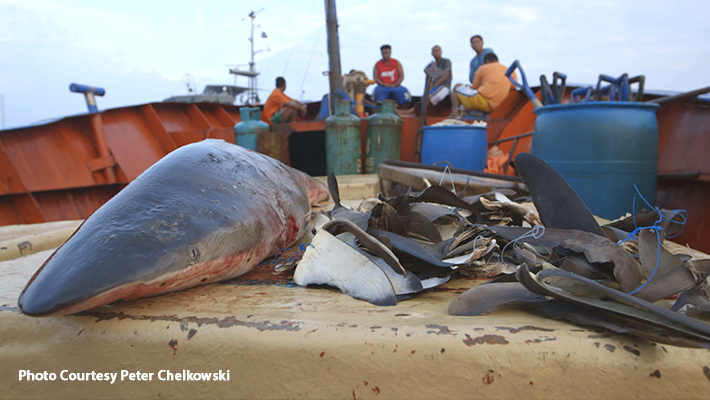 Ocean Warriors exposes another aspect of illegal fishing: off the coast of East Africa, fishermen are illegally bombing coral reefs to stun and harvest surrounding fish. It’s an indiscriminate way to kill both fish and reef alike, snuffing out the very ecosystems that enable fish to reproduce in the first place.

Although Ocean Warriors tells a grim story, I hope that it inspires more people to get involved in protecting our oceans – natural resources that play an integral daily role in filling our plates, regulating our climate, facilitating global commerce and inspiring people around the world with a sense of wonder and enjoyment.

After watching this series, many viewers might ask: what can I do to help? One way is to make informed choices about the seafood we buy: what type, where it’s from, and how it was caught. While this approach alone won’t solve the problem of declining fisheries, it is one of many choices we can make for greater ocean health, from the energy we conserve or purchase from renewable sources, to the leaders we send to Washington, to the companies we support – or not – with our purchases. We can also support the advocacy organizations, like those featured in Ocean Warriors, whose members are dedicating their lives to conservation – often at great personal sacrifice. Together, all these efforts make a difference.

Ultimately, reversing our oceans’ decline will take time, money, determination, and leadership. There’s no quick or simple fix. But we can and must pursue this vital endeavor, because the alternative is unacceptable. We must all, in our own way, become Ocean Warriors.