Despite an estimated 100 million sharks caught every year, 90 percent of the world’s fisheries fully or over-fished, and oceans in trouble worldwide, there is growing optimism that conservation can work and restore healthy seas.

A new study published by the Australia Institute for Marine Sciences and a team surveying the world’s sharks on coral reefs found that sharks can recover surprisingly quickly when protected by a well-managed marine park. Their finding shows why we need to count sharks, the importance of enforcing protected areas, and the cornerstone role marine parks can and must play in conserving and recovering shark populations and ocean health.

According to findings published recently in Biological Conservation, Drs. Conrad Speed, Mike Cappo, and Mark Meekan surveyed the shark population on Ashmore Reef in Western Australia in 2004, when it was unprotected, and again in 2016, eight years after the creation and strict enforcement of a marine protected area. In that short time shark numbers had increased more than 3.5 times.

The 2016 survey was part of the first ever global census of sharks on coral reefs, called Global FinPrint, sponsored by Paul G. Allen. This program has already assisted in the creation of new marine protected areas and other shark conservation initiatives in the Caribbean, and the research team is analyzing results to assess for the first time the status of shark populations worldwide. Without giving away the punchline, sharks are in deep trouble.

The authors of the current study point out that that Ashmore Reef was not just legally protected as a marine park, but no-fishing rules were strictly enforced. That is critical—on both land and seas, the world is full of “paper parks” which exist only on maps, where hunting and fishing continue to ravage wildlife populations. That is why another Paul Allen project, Skylight, is seeking to improve enforcement of marine protected areas and other fishing regulations by providing developing countries with real-time information about boats illegally fishing in their water, detected by satellite and machine learning systems. To save species and the seas, marine parks must be both created and enforced. 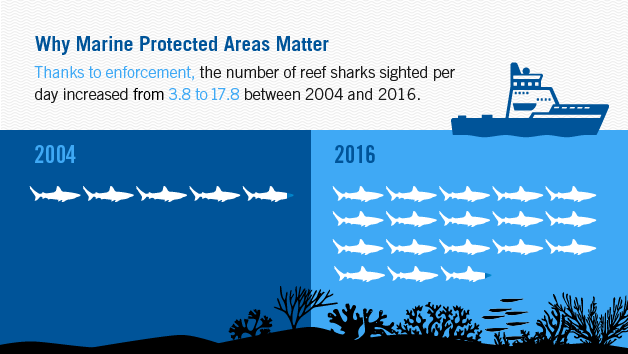 The effectiveness of marine protected areas in improving neighboring fisheries and livelihoods by providing a refuge for fish remains controversial (see an excellent recent review in Mongabay), but the ability of well-managed reserves to restore fish populations within their confines is absolutely clear. The current study applies to sharks as well as fish further down the food chain.

The Ashmore Reef study is important because it supports two additional conclusions for conservation strategy.

Through the Convention on Biological Diversity, 184 of the word’s nations have committed to set aside in marine parks 10 percent of their Exclusive Economic Zones by 2020. The global target has been met, but many countries have not reached their targets. Moreover, these nations will meet in Beijing in 2020 to set targets for 2030. The ambitiousness of those commitments will, more than anything else, determine the future for the world’s sharks and other sea creatures. Though the current situation looks dire, this research reminds us that nature can recover with just a little help from us.