Could the answer in protecting the world’s coral reefs lie in a new type of “hybrid” baby coral?

That’s what researchers are looking into after seeing positive signs from hybrid corals resettled on the Great Barrier Reef in early March.

“Most corals in the wild are now living at the very top of their survival limit in terms of temperature,” said lead scientist Professor Madeleine van Oppen, an ecological geneticist at the Australian Institute of Marine Science (AIMS). “But these corals are showing promise; we have seen some coral hybrids grow and survive better under elevated temperature and acidity levels, compared to their parents.” 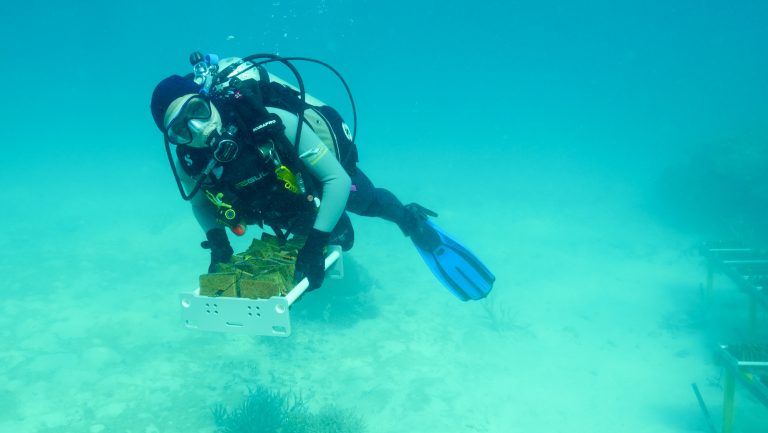 With recent estimates suggesting more than 50 percent of the world’s coral reefs lost since the 1980s, van Oppen’s research is part of a five-year, $4-million grant by the Paul G. Allen Family Foundation to AIMS in order to investigate different approaches to help corals evolve quickly enough to keep up with climate change.

Born and raised in Australia’s National Sea Simulator at AIMS, the most advanced research aquarium in the world and designed to replicate current ocean conditions, researchers have been using “in-vitro” fertilization techniques to help reef-building corals adapt.

“By taking the genes of one species and mixing the genes with a second species, [we] are creating new combinations and these new combinations can actually make the corals tougher,” said researcher Annika Lamb. “In the context of reef restoration, what we’re hoping is that by creating hybrids, we might be able to use them to stock reefs and make them more resilient to climate change.”

While currently still in field trials, we’re encouraged by these corals and what they mean for the future of coral reef restoration.

Hope After Destruction: Resurveying the Reefs of the Coral Triangle

Hope After Destruction: Resurveying the Reefs of the Coral Triangle