Cinerama has been wowing moviegoers since it opened in 1963, a year after the World’s Fair set Seattle on its path as a city of the future. For generations, movie fans young and old would line up around the block on Fourth and Lenora, waiting to see everything from 70mm classics like It’s a Mad, Mad, Mad, Mad World to modern-day blockbusters like Blade Runner 2049, films from the Star Wars franchise, or any number of big-budget summer movies. Cinerama has long been a favorite venue for sci-fi, action, and fantasy fans, drawing droves of enthusiastic movie buffs, often costumed, to showings.

Cinerama faced declining ticket sales in the ‘80s and ‘90s as multiplexes outside the city gained popularity. In the late ‘90s the storied theater closed and was slated for demolition so the land could be redeveloped. After seeing a flier seeking public support to save Cinerama at a local video store, Paul Allen took action. He had seen movies there as a child and his love for the venue motivated him to purchase the building and property with the hope of returning it to the grandeur of its early days. His intention was to create a place where the film-going community could come together and enjoy a shared experience.

Paul’s passion for film and this theater led to three major renovations. Cinerama’s most recent rework in late 2014 has been its most significant to date. It modernized the theater with the first laser projection system to be installed in a commercial theater, which provides stunning, crystal-clear images from any seat in the house, and a booming Dolby Atmos surround sound. Updated concessions featuring flavors of Seattle from the likes of Tom Douglas, Uli’s Sausage, and Rain Shadow Meats, plus local beer, wine, and cider completed the overhaul.

The renovation of the theater included a rebrand and a polishing of Cinerama’s exterior aesthetic. 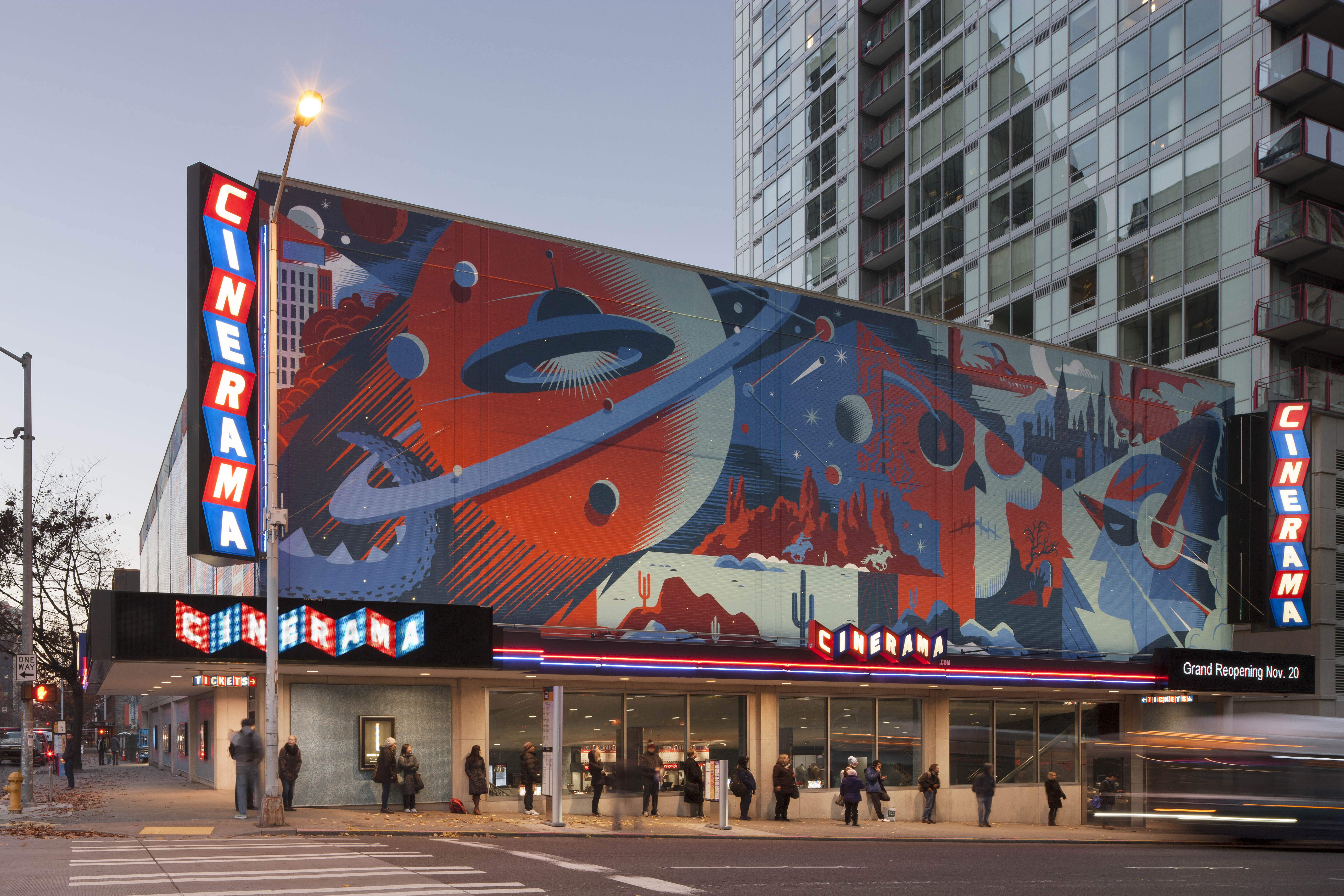 “When we began this renovation, the building itself was this Brutalist architecture, a monolithic gray block, and wasn’t very attractive from the outside. Basically the exterior didn’t match the experience you had on the inside, and we wanted to change that,” said Josh Lackey, marketing manager at Paul Allen’s Vulcan Inc. The team behind the rebrand decided to use the outside wall as a canvas for an interpretive mural, working with Seattle artist Don Clark of Invisible Creature.

“He was a huge fan of Cinerama. The first time I talked to Don, he said when he saw The Incredibles there, it changed the way he illustrates,” Lackey said. The mural became an homage to Cinerama’s history and celebrates the types of movies that are synonymous with the theater.

The renovation decreased the seat count from about 800 to 570 seats. The change created more legroom, and with updates like deeper-reclining seats and red faux leather upholstery, comfort here is at a premium.

“How many theater owners today are going to decrease their seat count in order to create a better viewing experience,” said Greg Bell, senior curator at Vulcan. This step is unorthodox on the surface, but points to Cinerama’s goal of creating the best possible movie-viewing experience.

Another way Cinerama adds to the spectacular movie-going experience is through the museum-quality displays in its lobby. Bell rotates the displays about every nine months, and what’s in them can be influenced by showings of special films.

These displays are often the first thing patrons see once they come through the door. Costumes and movie props that include Darth Vader’s menacing black uniform to The Dude’s simple sweater and baggy pants from The Big Lebowski have greeted patrons here in the lobby.

Other items that have been featured include a superhero-themed display with Captain Kangaroo, Batman, Superman suits, costumes from Blade Runner, and character outfits for Jean Luc Picard from Star Trek: The Next Generation, Scary Spice from Spice World, and The Riddler from Batman Forever. 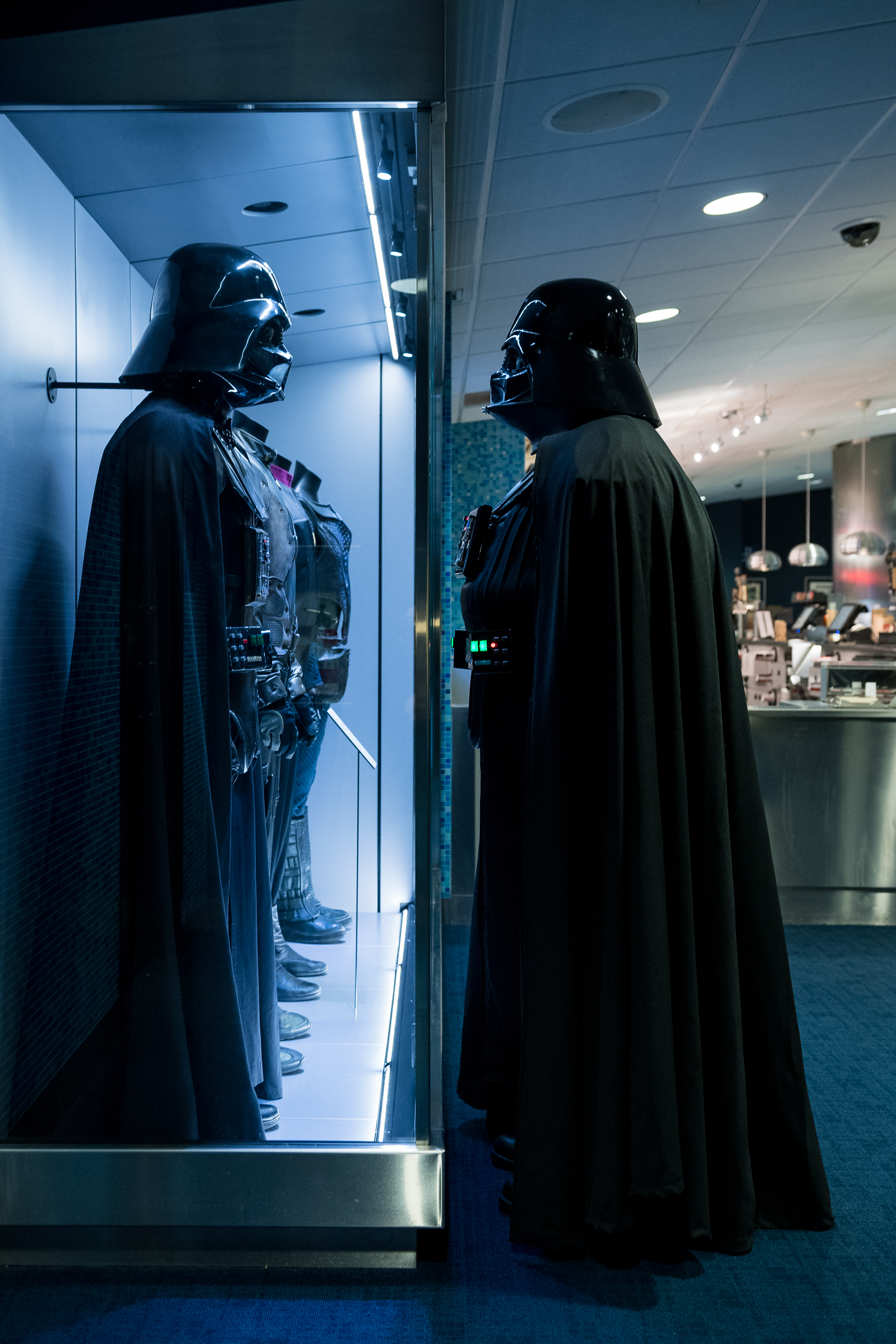 Bell advises moviegoers to take a close look at the costumes exhibited here. “Some of these are amazingly rich. The Blade Runner costumes were so beautiful...it’s hard to believe some of them would even stay on the characters, it looks like they are held together by duct tape, but then others are so well made and so intricate.”

The December 2017 release of Star Wars: The Last Jedi illustrated how special Cinerama has become for film fans. Tickets sold out in advance, fans showed up in homemade costumes, and even the 501st Legion made an appearance on opening night. Whenever there’s a major release, Seattle’s film buffs are drawn to the theater.

Today Cinerama is, as it has always been, a significant part of Seattle culture. 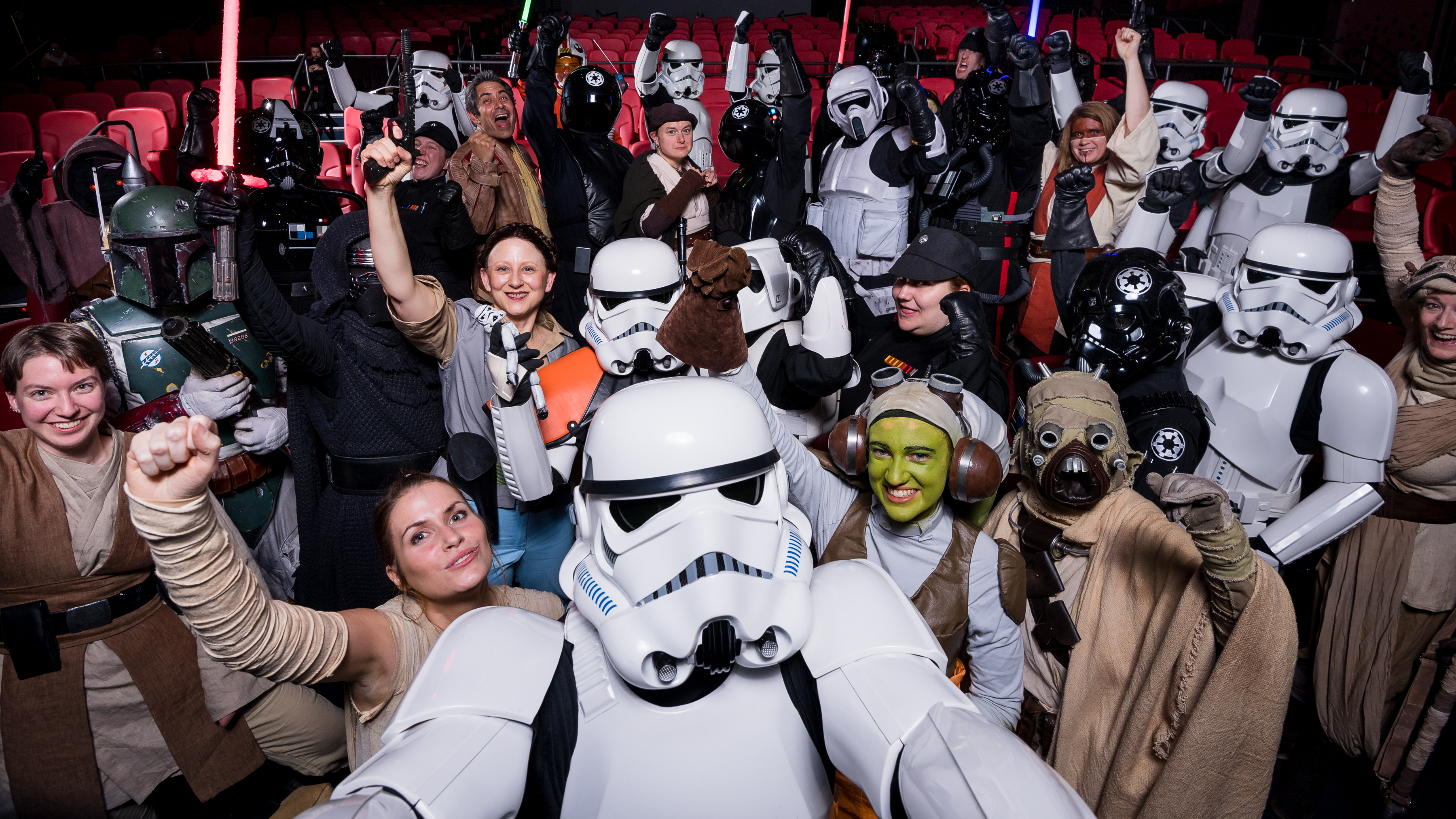 ‘STEP’ Highlights the Power of the Arts for New Audiences

‘STEP’ Highlights the Power of the Arts for New Audiences

Calling on Hollywood to Make More Films About Climate Change

Calling on Hollywood to Make More Films About Climate Change