Erik Nelson is the director of “The Cold Blue”, one of Vulcan Productions’ latest films, premiers on HBO on June 6.

“The Cold Blue” is a reconstruction of footage shot in 1943 by William Wyler, one of Hollywood’s most renowned directors of the era (“Ben-Hur”, “Roman Holiday”, “The Best Years of Our Lives”). Wyler travelled to Europe to document air war of World War II and flew in combat missions with the 8th Air Force, putting himself and his team in peril to capture the war up close. 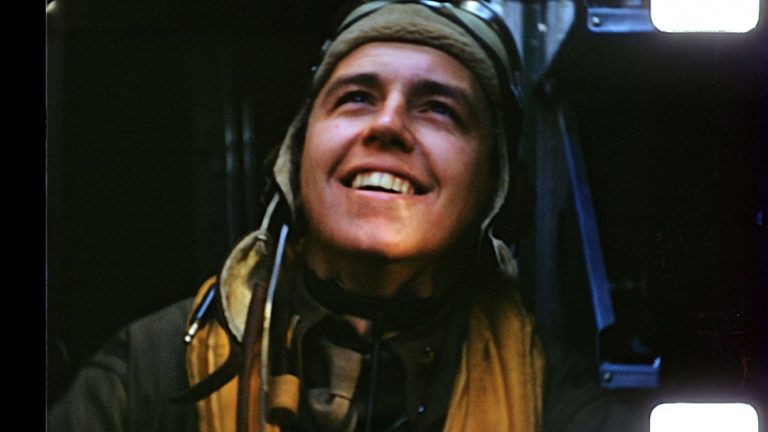 Nelson believes that history is too often reduced to the cliché, black and white images that immediately distance us from the past. So when he learned about the existence of 15 hours of Wyler’s raw, color footage in The National Archives in Washington D.C., he recognized an opportunity to tell an amazing story. Using the raw footage and interviews with some of the last surviving members of the 8th Air Force, Nelson created “The Cold Blue”.

Is there a misconception about WWII pilots you debunked in the making of this film?

A popular misconception of the bombing raids over Germany is that people think the riskiest and most dangerous parts of the mission were actually when U.S. pilots were being shot at by flak or enemy fighters. In creating “The Cold Blue”, I didn’t fully realize the most dangerous part of any mission was literally taking off in British weather. The scariest part of any mission was before it officially even began! That was something I’d really not fully appreciated before.

The second thing that I was surprised at in conversation after conversation, was that none of the gunners we spoke with ever shot and hit a German airplane. The guns on the B-17 were mostly a placebo. They rarely actually hit the enemy; they were more to keep the enemy away. That misconception is perpetuated in every Hollywood movie where you think that the machine gunners are shooting German planes like partridges out of the sky. In fact, every single person we interviewed for “The Cold Blue”, or subsequently spoke to – including the most recent with Norman Lear who was a top turret gunner – not one of them ever shot down a German airplane.

What’s an obstacle you faced while making this film?

One of things that people don’t realize when watching the film is that everything that Wyler shot was completely silent. So in order to bring the film to life, we had to locate and secure a B-17 in flying condition that would allow us to record audio of what it really sounded like while in the air. There’s only eight B-17’s flying today and one of them is flown by the Collings Foundation. When we reached out to them, they invited us to come down to Florida and stay with them for four days as we taped all the sounds we could possibly need for the film. I can’t stress enough how much the Collings Foundation contributed to this production.

Richard Thompson composed an original score for “The Cold Blue”. For people unfamiliar with Thompson’s work, what should they listen to in order to get acquainted?

Well it’s tough to say his body of work spans 50 years. There’s really literally no place to begin. Bonnie Raitt covered him, R.E.M. has covered him … he has played guitar with just about everybody as a session musician, including Bob Dylan. Check out “Vincent Black Lightning” and “Dimming of The Day.”

What do you hope audiences will take away from “The Cold Blue”?

A full appreciation and a redefinition of what heroism means – of what ordinary men did in the most extraordinary of circumstances day by day.

How are you going to honor Memorial Day?

The point of “The Cold Blue” is to pay this story forward, to create something new that would remind people, remind viewers — young and old — of what these guys went through.

In essence, this is the last call – likely the last time any of these guys are ever going to speak on the record about their experiences. So on Memorial Day, I’m going to feel like this was mission accomplished; that the team that created “The Cold Blue” did what they could to pay these guys’ story forward.

What gives you hope?

Heroism. Heroism in getting up in the morning knowing what you were facing, and walking out to the tarmac and doing it, day after day, without question, and for a cause they earnestly believed in. That is not unique to WWII, not unique to the flyers in WWII, but it’s more distilled in the WWII flyers. Unlike the guys who were fighting through Europe on the ground, these men would fly back and be in comfortable circumstances, and then would have to do it all over again the next day. So they were ripped out of comfort on a daily basis and put in these insanely dangerous circumstances.