Our “summer of honor” comes roaring to life at TankFest Northwest, an event dedicated to celebrating marvels of engineering and the unique artifacts at Paul Allen’s Flying Heritage Collection and Combat Armor Museum (FHCAM). FHCAM brings these vintage machines back to life in the hangar and sends them rumbling and roaring across the Paine Field tarmac. The tanks of TankFest are diverse in their role in military history as well as their individual stories. No detail is spared when restoring these machines, and everything from the camouflage color to the names on the tanks are to honor to actual historic machines. Below, scroll through a few of the unique tanks and armored vehicles you can see rumble and roar at TankFest Northwest this Memorial Day weekend at Paine Field in Everett, Washington. If you’re too far away to attend, be sure to follow Vulcan and FHCAM on social media to see photos and videos of these incredible vehicles brought back to life.

The Sherman was considered the workhorse of tanks during WWII. Reliable, easy to maintain and highly mobile, versions of the Sherman were also used in other functions; as bulldozers, mobile bridge carriers, recovery vehicles, mine exploders and flamethrowers. The tank was powerful but simple and could be built in factories that made automobiles, trucks and train cars. In the face of improved German designs, the Sherman was easy to upgrade over the course of the war to include more armor and more firepower. The Sherman you can see at TankFest wears the colors of the “Boomerang”, a tank from the 7th Armored Division, 31st Tank Battalion, known as the “Lucky Seventh”. The 7th Armored Division played an integral role in the liberation of Europe. They landed on Omaha and Utah during D-Day and helped liberate France, participated in Operation Market Garden; providing protection for British and Canadian forces fighting to liberate the Netherlands, and would go on to fight in the Battle of the Bulge, and occupy East Germany.

The Stuarts were the first American-crewed tanks to engage in combat during WWII, designed for scouting and infantry support. Outfitted with twin Cadillac engines, and a 37mm cannon, which limited the Stuart’s ability to face off with German tanks, these small tanks were lovingly referred to as “Honey”, after a proud British driver remarked of the vehicle, “She’s a honey.” Stuarts saw battle in the last phases of WWII’s North Africa campaign, through the invasion of Italy and France, and into Germany. 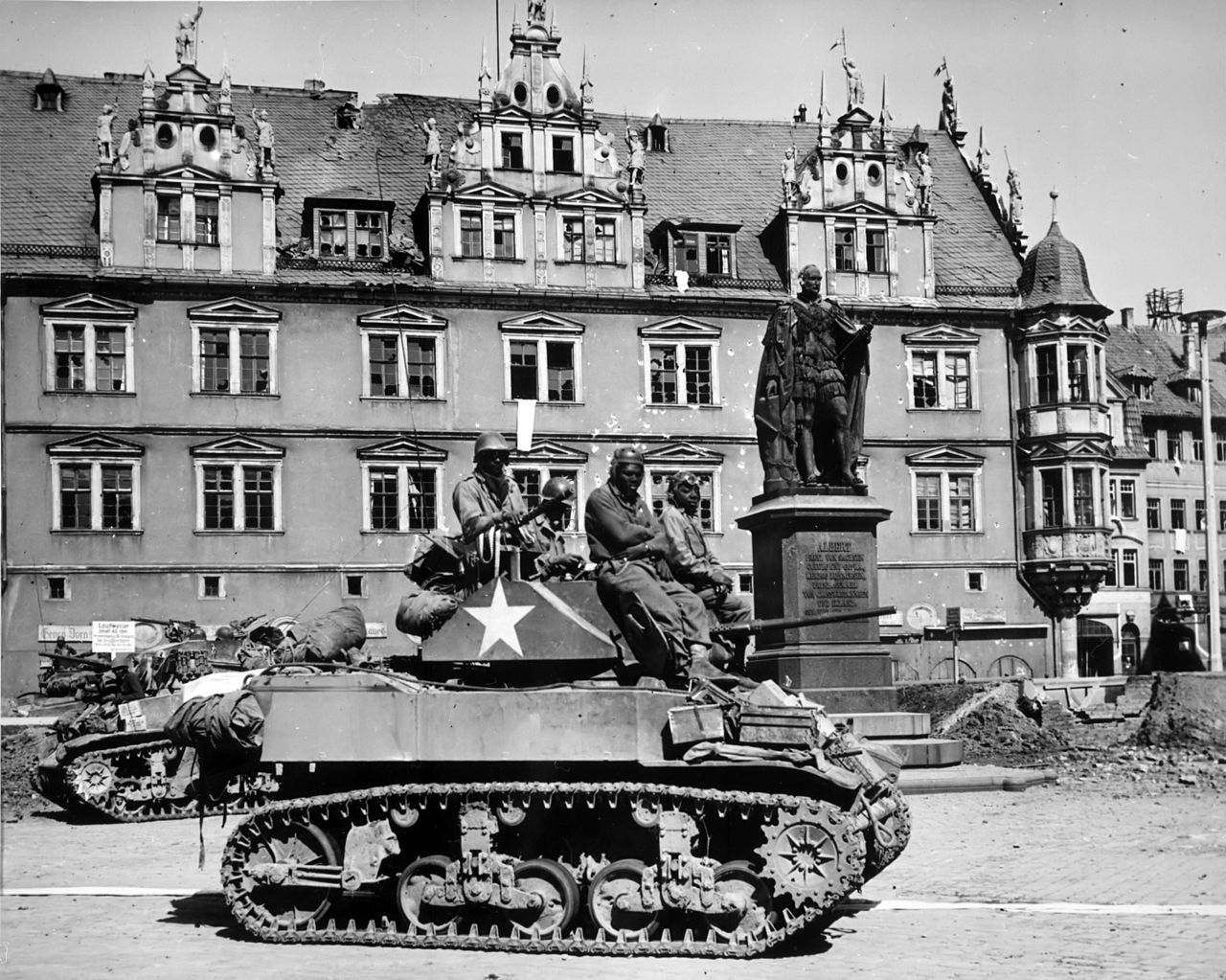 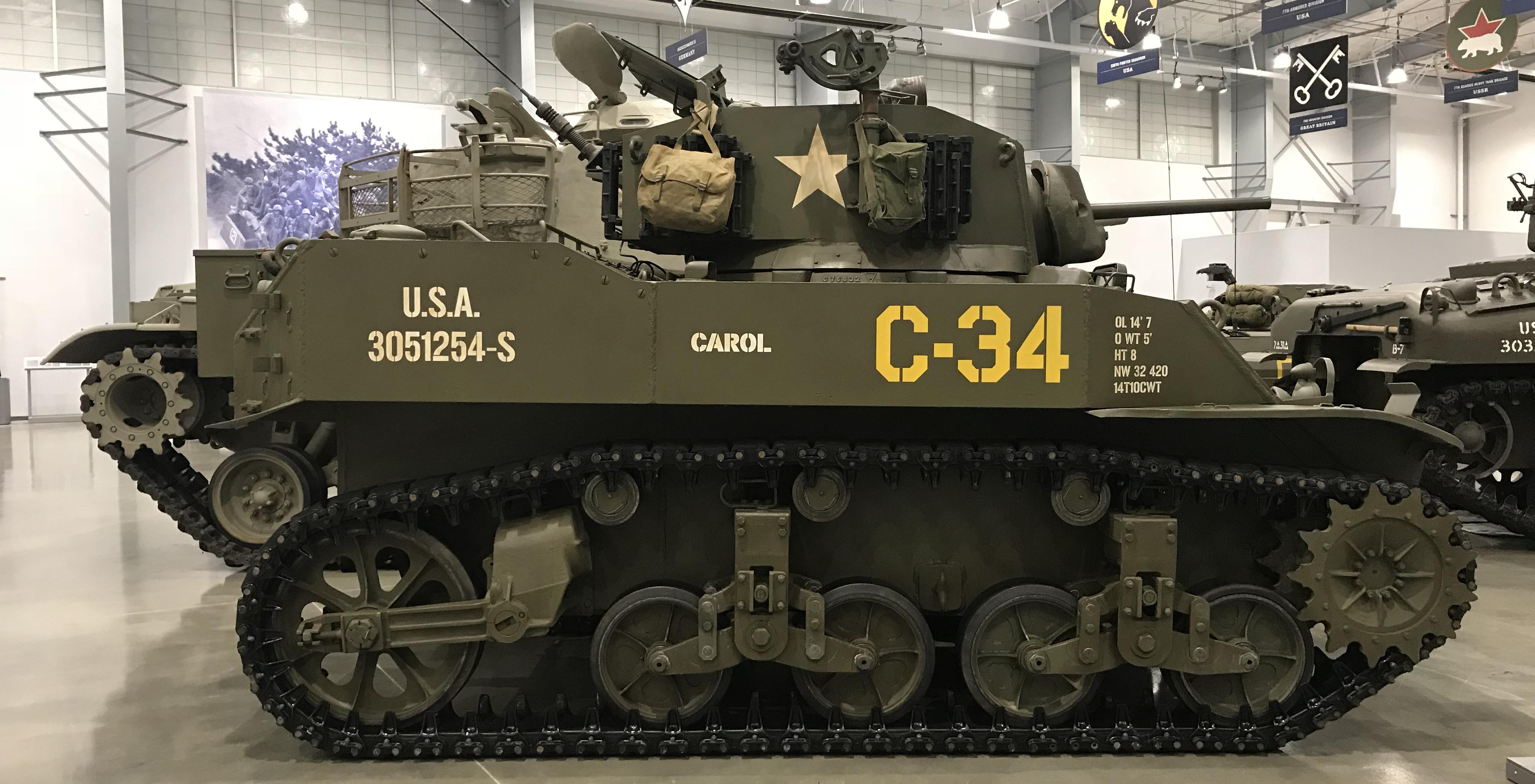 Our restored M5A1 Stuart Light Tank ready to roar to life at TankFest 2019.

The Soviet T-34 is widely considered to be one of the best tanks ever built, with a design striking a winning balance between speed and functionality. One of the key successes was that it was built to evolve alongside warfare, taking experiences from encounters and using them to upgrade the tank accordingly. More T-34s were produced by the Soviet Union during WWII than any other tank in any nation. The FHCAM’s T-34 you’ll see at TankFest was built at the end of WWII, and painted in the colors of a vehicle that fought in Belarus in January 1945, reflected in its typical winter camouflage scheme of green and white. The slogan on the side translates to “For General Bagramian”—the famous Soviet Marshal of the 34d Belarusian Front in 1945. 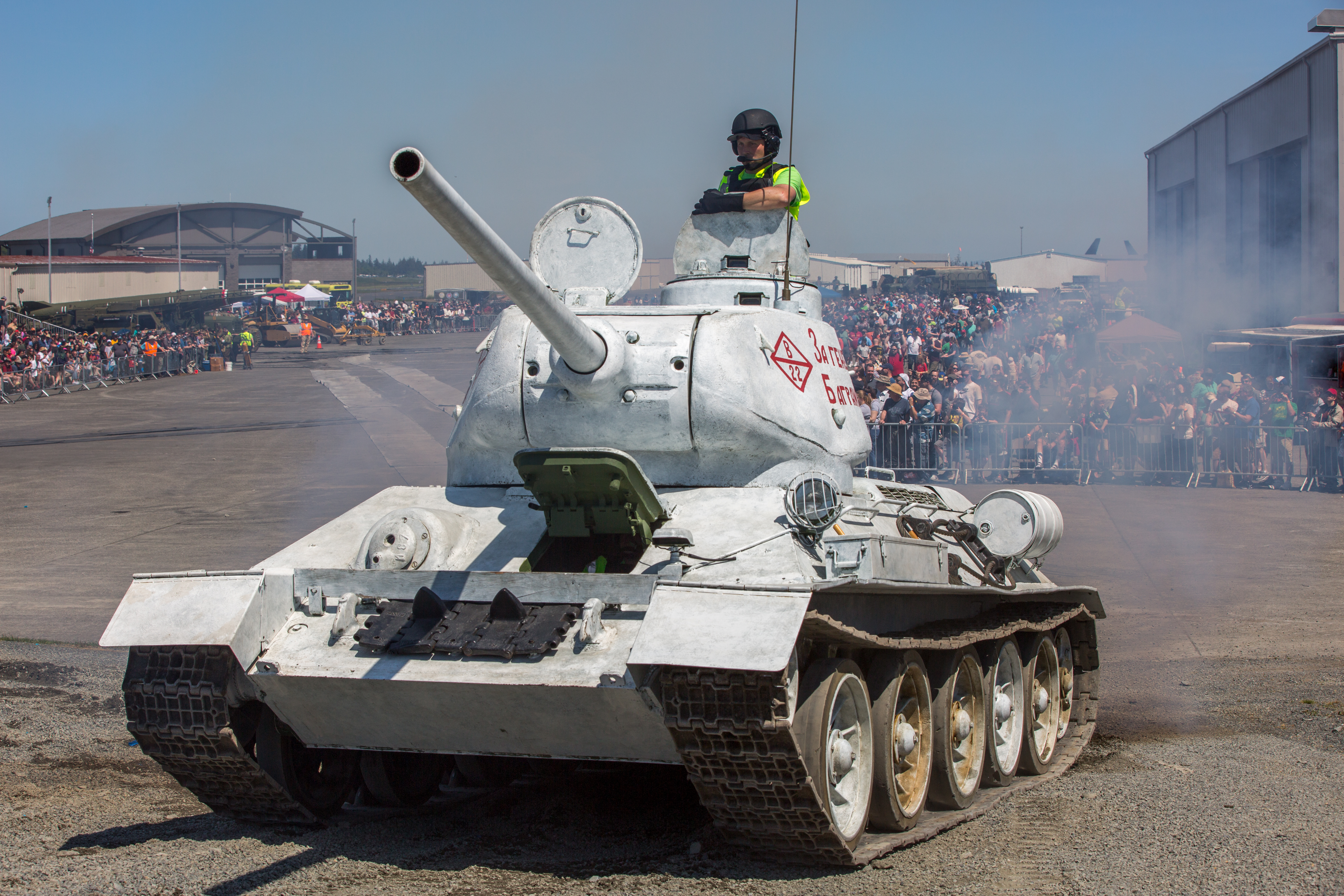 This unique German tank destroyer was often used to ambush advancing Allied tanks during WWII. Rushed into service in 1944 as the Allies rolled over German Occupied Europe, a skilled Hetzer crew could lay in wait and make their first shot hit solidly against a moving target from 1,000 meters away. Hetzer loosely translates to “Baiter” or “Troublemaker”. The FHCAM’s Hetzer is painted in the “tank hunter” 167 markings, a unit that participated in the Battle of the Bulge in 1944/45. 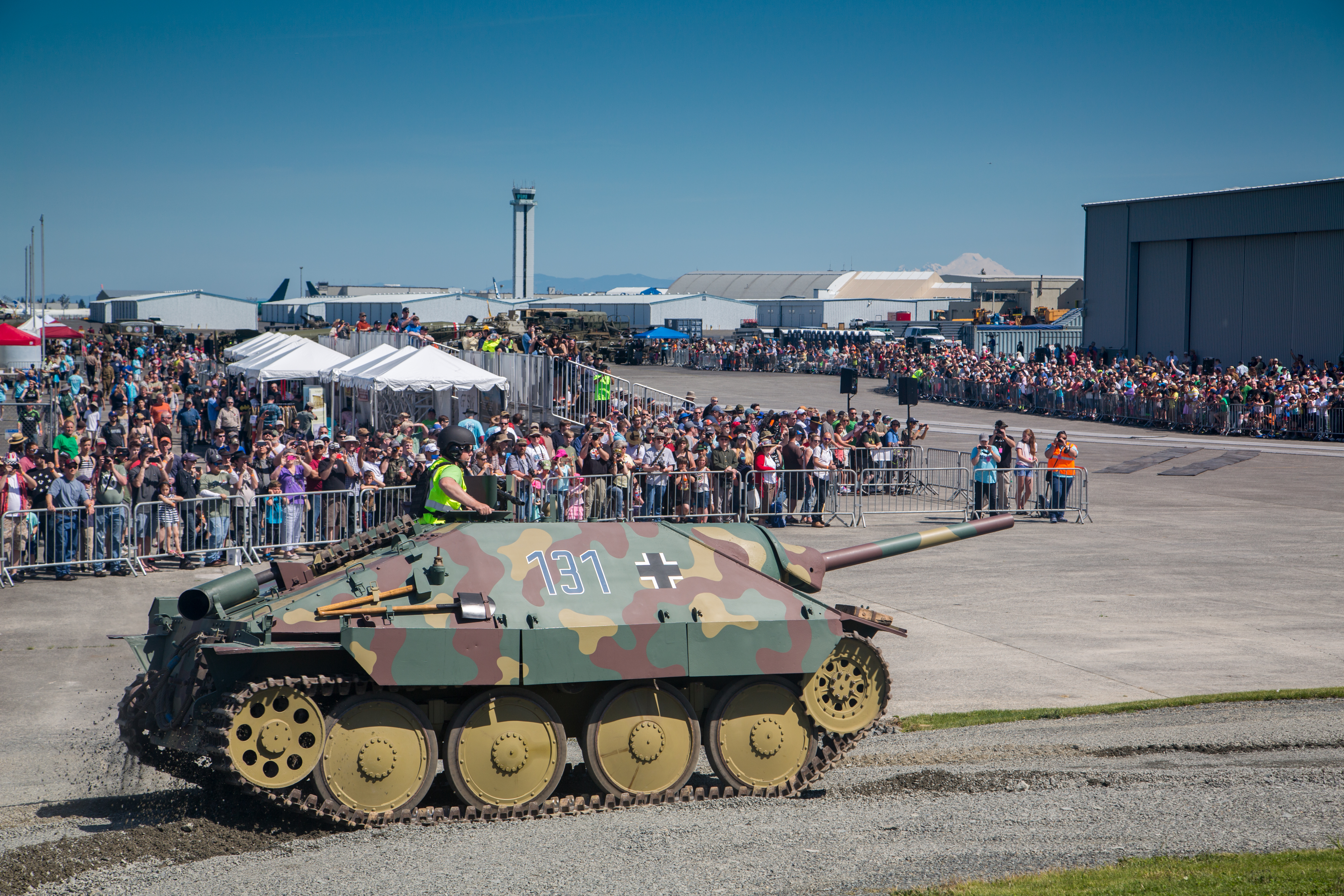 As tanks became faster and more mobile, military leaders looked for ways for infantrymen to keep up and furnish constant support. An armored truck, mated with a rugged bogie and track suspension system in the rear, allowed foot soldiers to quickly move with modern, mechanized attack forces. The FHCAM’s half-track was originally made by the White Motor Company of Cleveland, Ohio. During WWII, White Motor Company’s tagline was, “Trucks You Don’t Steer…You Aim.” 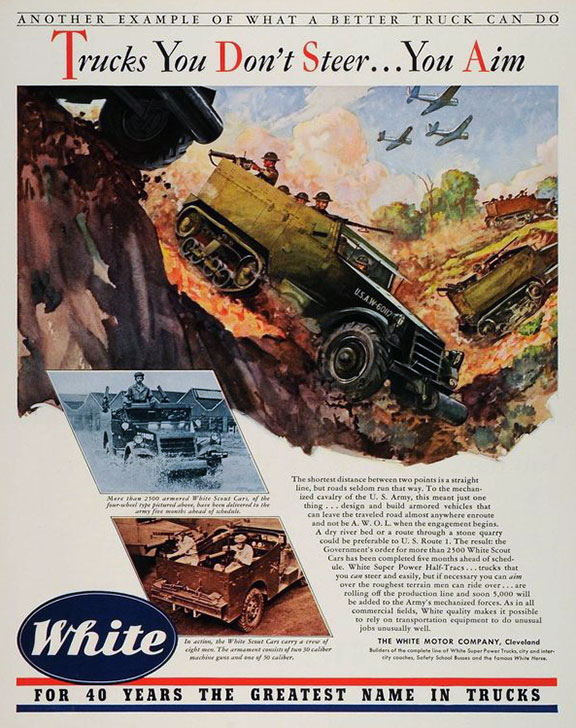 Before World War II, the nickname “jeep” was soldier’s slang for anything insignificant, awkward, or silly. The term probably came from a character named Eugene the jeep from 1930s Popeye comics. The military loved the jeep because it was tough and adaptable. Reporter Ernie Pyle wrote, “It did everything. It went everywhere. Was a faithful as a dog, as strong as a mule, and as agile as a goat. It constantly carried twice what it was designed for and still kept going.”

The FHCAM’s Ford GPW Jeep has as special connection to Paul Allen, as the GPW Jeep is dedicated to Paul’s late father Kenneth Allen and his service during WWII. Kenneth Allen would have operated this model of jeep while he served with his fellow infantrymen of the 501st Quartermaster Railhead Company. Kenneth Allen was with his company when it was bombarded near Remagen by Nazi soldiers firing Flak Guns loaded with 20-pound shells. Kenneth survived. He returned from overseas with a Bronze Star and haunting remembrances of friends who would never come home. Inspired by Kenneth’s unit, this paint scheme jeep is a standard one, with stars on the hood and sides and a lusterless blue drab registration number on the hood. Registration numbers were painted blue instead of white because enemies were better able to see white numbers in black and white photos and estimate how many jeeps were in production. The most defining part of Kenneth Allen’s unit are the bumper codes. 1A-501Q-RHD-5 means “First Army, 501st Quartermaster Railhead Company, vehicle five.” 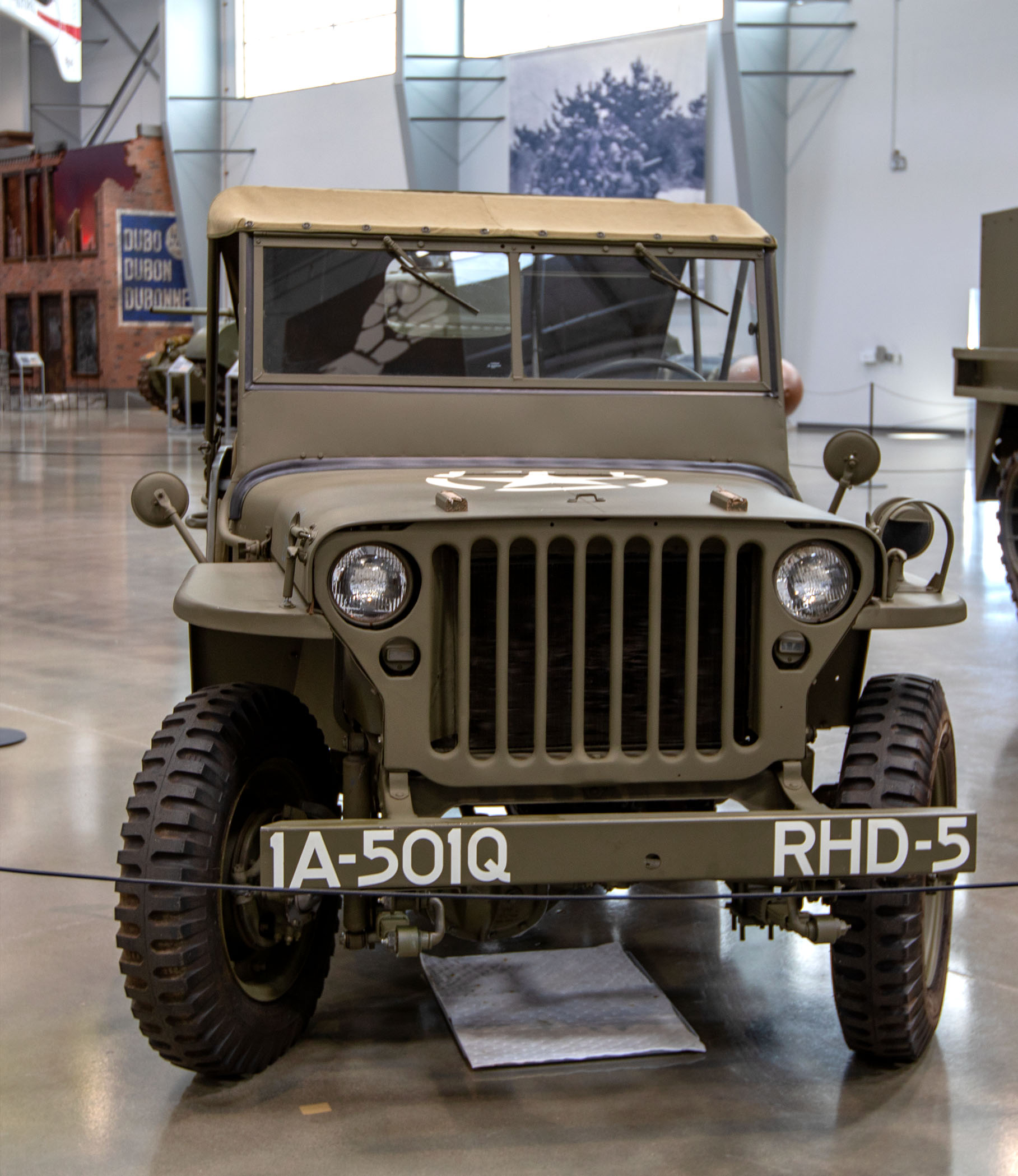 The paint scheme for this Jeep was inspired by the jeeps standard to Paul’s father Kenneth Allen’s unit in WWII.

In contrast to the American Jeeps, the Germans had the Kubelwagen, which means “bucket car” and was based on the famous Volkswagen Beetle designed by Ferdinand Porsche. This unique vehicle’s engine had no radiator, making it less susceptible to gunfire or shrapnel damage. Over 50,000 of the light military vehicle type were built during WWII, and the Kubelwagen was utilized by German forces across the different WWII fronts because the car’s flat underbody allowed it to “sled” over mud, snow, and sand rather than bogging down. Kubelwagens were used primarily as staff cars and reconnaissance vehicles near the front lines. The working Kubelwagen you see at TankFest was built as a three-place radio car and is painted with a three tone camouflage scheme seen in Occupied France during the Battle of Normandy in 1944. 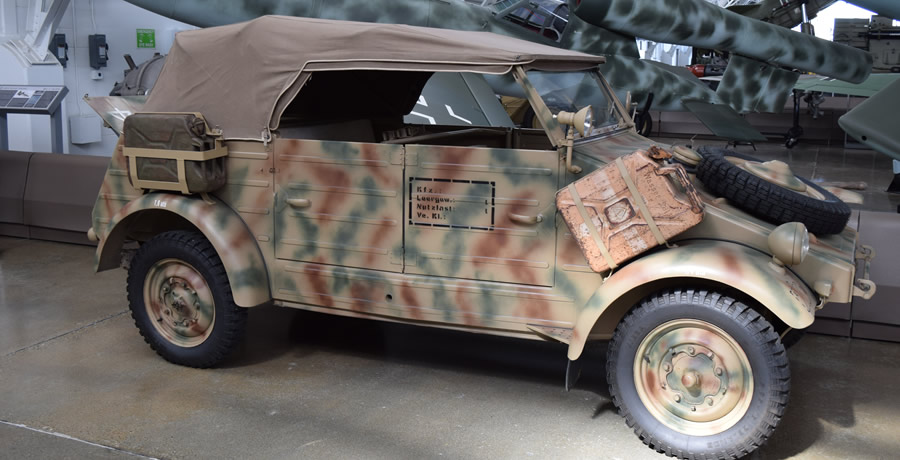 You can get tickets to TankFest Northwest here, and see all of the tanks, planes and combat armor in the FHCAM collection.